Snapshots - #37: It, Breathe, Mark Felt – The Man Who Brought Down the White House 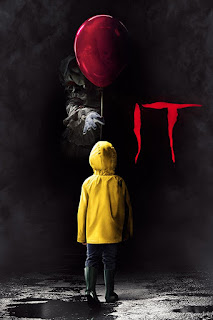 It (2017), (♦♦♦♦): Four inseparable friends in middle school bond with other three newcomers. They all have in common that they are bullied by the same people. Over the course of one summer they'll fend off bullies and face a centuries-old demon in the form of a clown, named Pennywise, whom has been disappearing kids and terrorizing the town of Derry, Maine, every twenty-seven years since the town was founded.


Based on Stephen King's novel of the same title, It is a movie with a smart script and a sympathetic ensemble of nerds that deliver light humor, and deep thrills. It doesn't hurt that each and every character has his or her own arc, thus one gets to know their motivations and fears before Pennywise enters head on into the picture.


In a nod to 1980s movie classics such as The Goonies, and the Brat Pack ensemble, the newest adaptation of It takes place at the end of that decade, when it seems, at least from the Hollywood perspective, that every kid harbored a genius inside, and all were brave, bold, and had more adventures than kids from eras prior or since. One of them even says something like "I don't remember when we invited Molly Ringwald into our group!", voicing exasperation over a girl dictating what they should or shouldn't do.


Again, the humor is very light, but the thrills are definitely there and they work like they are supposed to. One roots for this band of misfits and will feel validation when they finally prevail over their fears and threats. It will especially resonate with the generation that grew up in the 1980s, or people who love the movies from that era. Overall, It (2017) is mightily entertaining if you don't mind to be spooked. 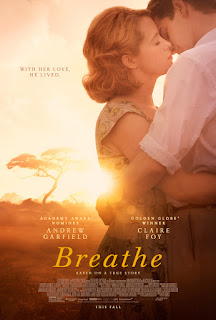 Breathe (2017), (♦♦♦♦): Young Robin Cavendish (Andrew Garfield) falls in love with Diana (Claire Foy), a lady of means, in England, 1958. Robin has a business in Kenya brokering tea leaves, thus he proposes to Diana before embarking on a trip, and she accepts. For the next year or so, they adjust to life as émigrés, enjoying an active social life. Diana gets pregnant. Then tragedy strikes: Robin inhales the polio virus and becomes completely paralyzed overnight.


Faced with a devastating prognosis of only months to live, bound to an electric respirator doing the breathing for him, Diana decides to wait until giving birth, and return the family, Robin included, to England. Tied to a hospital bed, Robin gets depressed. He refuses to see Diana or his baby son, Jonathan. He wants to opt out of life. Diana consults his doctor and the director of the clinic to find out if he could live at home. Robin needs that respirator or he could die, ghastly, in under two minutes, they say. Either way he dies, Robin muses, thus he is in with the plan, and, aided by his doctor and two nurses, Diana executes a daring escape from the hospital. Now he only has to survive.


Based on real events, and given the poor prognosis that Robin faced, Breathe could easily have gone down the teary, sentimental route, but it isn't that kind of story. Keeping the humor light, but with enough sharpness to cut deep, Breathe is a lesson on living and making the most of whatever time you have. It is a study on love, and to a certain extent it is a romantic movie at heart. It helps that the photography and cinematography are outstanding, that the characters have depth while remaining sympathetic, and that there is great chemistry between Garfield and Foy. 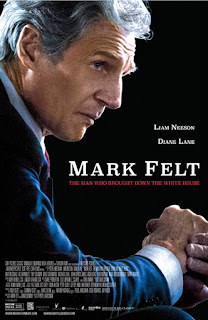 Mark Felt – The Man Who Brought Down the White House (2017), (♦♦♦♦): With thirty years of service in the FBI, assistant director under J. Edgar Hoover, Mark Felt, knew it all and had seen it all. That's why, upon the death of Mr. Hoover, he felt the need to protect the institution he had sworn allegiance and dedicated years of his life to, from outside interference, namely a Nixon administration intent on preventing the FBI from probing White House officials for widespread corruption and linking them to the wiretapping of the Watergate building, See of the Democratic Party.
Mark Felt's talks to Washington Post's reporters Bob Woodward and Carl Bernstein, by his own admission in 2005, triggered a domino effect that brought down Nixon's administration, three months into his second term. Such is the power of the press.


Brilliantly acted by some of the biggest stars in the small and big screen, such as Diane Lane, Josh Lucas, Tony Goldwyn, Tom Sizemore, Michael C. Hall, Eddie Marsan, Kate Walsh, and Liam Neeson in the leading role, Mark Felt - The Man Who Brought Down The White House is an intriguing political thriller about the inner workings of an FBI investigation.


If Mark Felt… doesn't quite capture the hysteria and paranoia of 1972, though it tries—e.g., FBI agents talking incognito in their cars because their phones and offices may be bugged, general distrust from not knowing where the leak is coming from, the musical score that underscores the tension—or the breadth of the Washington Post's reports and why they mattered, it works well as companion piece to movies like All the President's Men and Frost vs. Nixon, which go deeper into the journalists' reports and how they chipped away the confident facade put forth by the Nixon administration.


My only criticism has to do with the poor makeup and hair dye used on Liam Neeson, which make his face seem more a mask than something natural; it was so bad that it was distracting. Aside from that, never more than now is Mark Felt… strongly recommended.
2017 movies movies reviews snapshots