Snapshots - #38: Only the Brave, Jane, Jumanji: Welcome to the Jungle 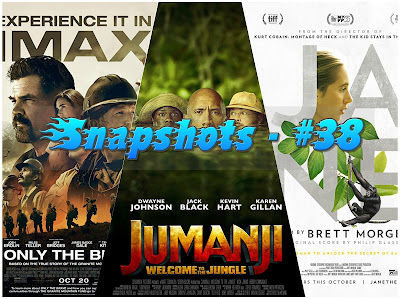 Only the Brave (2017), (♦♦♦♦): Based on the true story of the effort it took to get a municipal crew of firefighters from Prescott, Arizona, certified as Hotshots. After battling thousands of wildfires since their inception, the Granite Mountain Hotshots answered a call to battle the Yarnell Hill fire—about 30 miles away from Prescott—along with several other crews. How they got to that point and what happened is what this movie is about. 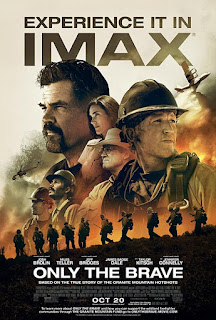 Only the Brave is a drama with some thriller on the side, and excellent performances to boast of. It's got a dynamic pace, engaging plot, amazing shots of wildfires, fun camaraderie, and great music to underscore the action. As an audience, we care for the journey of that crew, individually and as a group, and as heartbreaking as the closing scenes are, we stand in awe at the sacrifices that firefighters and their families make every day of their lives. Only the Brave is a darn great tribute to them, and elite firefighters such as the Granite Mountain Hotshots. 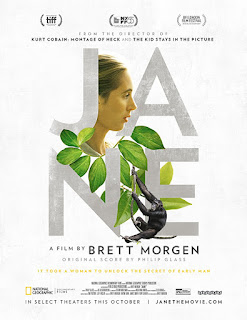 Jane (2017), (♦♦♦♦): In 1957, Doctor Louis Leakey secured a grant for the research of chimpanzees’ behavior in the wild. He wasn't looking particularly for a university graduate, but a person with a deep love for animals, patience, and an open mind. He recruited his then 26-year-old secretary, Jane, to travel to Gombe, Tanzania, to set up camp and report her observations. What ensued was the pioneering and longest running research of animal behavior of a single species in the wild that has lasted for more than fifty years.

Pieced together from more than 100 hours of recording by wildlife photographer Hugo van Lawick, Jane is a documentary film on the life and groundbreaking research of Jane Goodall. Sometimes in voice over narration, accompanied by brief interview style, we learn of her humble beginnings, her mother's invaluable support, her collaboration with van Lawick—she as an observer, he as a videographer—, their blooming love and eventual wedding, as well as the evolution of her research—starting with the days when it was only observations via binoculars, to the eventual trust and acceptance by the first chimp community she interacted with.


Jane is chock full of stunning wildlife photography courtesy of Hugo van Lawick—renowned as one of the best wildlife photographers ever— from the Gombe chimps, native wildlife, as well as the Serengeti plain migration. Jane is also an inestimable source on the life of a pioneer researcher and her invaluable imprint on her field of study. 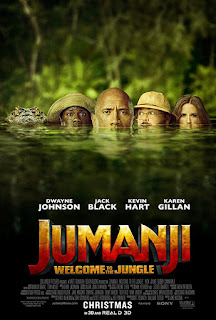 Jumanji: Welcome to the Jungle (2017), (♦♦♦♦): Four high schoolers are sent to detention and accidentally find a video game that sucks them right into its midst. Their avatar alter-egos, all with varying degrees of strengths and weaknesses, will have to defend a fabled land called 'Jumanji' from the curse that has overtaken it. They each have been given three lives and a map to complete the task of replacing an ancient stone, stolen by a rival, that is the source of balance to Jumanji. Together they will face assassins, wild animals, as well as brave the elements. But...will they be able to survive the challenges of 'Jumanji' and leave unscathed, or at all?

Jumanji: Welcome to the Jungle works best when it doesn't take itself too seriously. Its humor, when not trying too hard, which is already in the middle of the action with the characters inside the game, is very tongue in cheek and makes ample use of the movie's secret weapon: the presence of high caliber comedian Kevin Hart handling some of the most inspired jokes. The ones courtesy of Bethany's alter ego (Jack Black) are juvenile at best (e.g., Jack Black hitting on Nick Jonas), and likely intended towards a young audience.


Overall, the action is entertaining and the setting is beautiful. If well time won't feel like it has flown, at least the film will make you feel like you got your money's worth with pure escapism.
2017 movies movies reviews snapshots