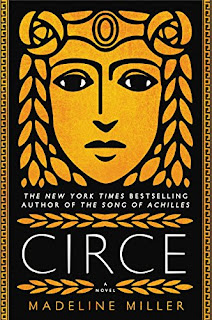 Granddaughter of Oceanus, daughter of Titan Helios and sea nymph Perseid, Circe was different from the start. While her siblings discovered their unique gifts very early on and gained their independence—either by claiming their inheritance, like Perses and Aëstes, or by marriage to a wealthy demigod, like Pasiphäe—, Circe remained among her family in the halls of the gods. Her love for young fisherman Glaucus changed everything.
Circe used a potion to transform Glaucus into a worthy suitor. Glaucus, seeing his station changed, fell in love with one Circe’s cousins, a sea nymph named Scylla. Out of jealousy, Circe put a potion on Scylla’s bath and, unintendedly, transformed her into a monster. Circe’s confession forced Helios to go to see Zeus, for witchcraft is something that gods fear can tip the balance of power. Zeus declared an eternal banishment for Circe from the halls of the gods to the island of Aiaia.

Exile was not easy but, as Circe learned, it had its advantages; being away from the scheming and plotting of her family was one of them, or so she thought, because over the centuries Olympian cousins (i.e. Hermes, Apollo and Athena) came and went. On Aiaia, Circe found her true gift; being surrounded by wild animals and exotic plants allowed her to master her craft. Then the world came calling...First, it was famed artisan Daedalus on Pasiphäe’s behalf. She was pregnant and requested Circe’s assistance to deliver what came to be known as the Minotaur. Then, it was ship after ship of desperate men who took advantage of her, some of whom she got rid of by transforming them into pigs. Then came Odysseus, whom with his blazing personality changed her life in unexpected ways.
I had a somewhat uneven experience with Circe. I read continuously and was blown away by the first half—Circe’s wide-eyed childhood among the Titans, her memory of having witnessed the whipping of Prometheus beyond recognition, her attachment to younger brother Aëstes to whom she confessed everything, her love for Glaucus that woke up emotions in her she didn’t know she had, like the jealousy that made her transform pretty Scylla into a monster; her banishment, the mastering of her craft, her liaisons with Daedalus and Hermes—who was fun to read about and delighted me to no end—her delivery of the Minotaur...

Then came the abuse and the transformations of men into pigs. That’s what after all Circe is famous for, but I found those passages tedious, maybe because Madeline Miller made a point of reminding us that all those men were the same: satisfying baseless instincts without regard for the woman who had helped them in their moments of need. Odysseus changed all that...Odysseus, to whom Hermes had confessed some of Circe’s best guarded witchcraft secrets...Odysseus, the favorite of Olympians during the Trojan War...His vivid memories of the war not only made the intervening passages between the 50% and 85% of the book come alive, but also made me want to read The Song of Achilles. Then Odysseus left and motherhood began. I found that part of the book so overwhelming that I thought a few times on abandoning this book. Seventeen years passed by between the departure of Odysseus and the arrival of Penelope on Aiaia, and I think I felt every single one of those years reading-wise. With Penelope’s arrival, I thought the book recovered the magic of the first half, or probably it was me paying closer attention by the end.
I have to say that Circe is a book that should be read with as little interruptions as possible, because it is a very literary novel, full of beautiful imagery that is hard to visualize effectively when you abandon a passage midway. Circe requires full immersion, but it pays off in the end. Despite some misgivings, I thought this novel was very good overall, and made want to follow Madeline Miller’s career further. I’ll be starting with The Song of Achilles and can hardly wait for what she writes next.
Disclaimer: I received from the publisher a free e-galley of this book via Netgalley in exchange for my honest review.
2018 books books reviews Madeline Miller