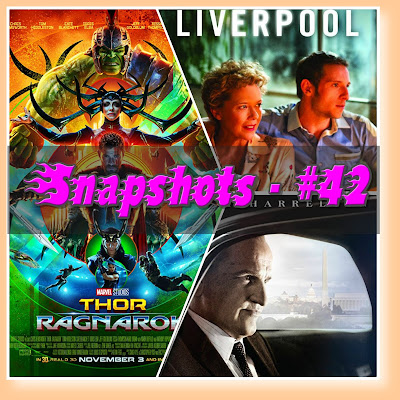 Thor: Ragnarok (2017), (♦♦♦♦½): Thor has saved earth twice by now and has, for the last two years, wandered the universe searching for infinity stones. He hasn't found any. He has, however, become prisoner of an enemy of Asgard, Surtur, who tells Thor that his visions of Asgard engulfed in flames is a premonition of Ragnarok—the destruction of Asgard, which is already in motion. Thor frees himself and arrives at home to find Loki sitting on the throne, passing as Odin, and neglecting his duties to protect the Nine Realms. With Odin's exile, Asgard's enemies have been reassembling, but Odin's death may just free Hela, a goddess against whom neither Thor nor Loki are enough. 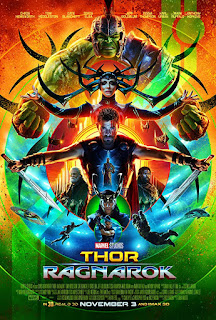 It was in Thor: The Dark World where Loki, an antagonist, first threatened to steal the show. He became the villain that Marvel fandom loves to hate. While Loki is at his most charming in this film, the director, with the help of a sparkling screenplay, has very much exploited the great chemistry of the whole ensemble, including the excellent dynamics between Chris Hemsworth as Thor and Tom Hiddleston as Loki. Cate Blanchet as Hela, Norse goddess of Death, is one heck of an actress portraying one heck of a villain, to be admired even more because she is Marvel's first female villain. She is a wonderful and sassy addition to Odin's family of misfits.


Some old characters of the franchise reprise their roles, such as Idris Elba as Heimdall, and Anthony Hopkins as Odin. There are also wonderful additions to the cast such as extended cameos by Benedict Cumberbatch as Dr. Strange and Jeff Goldblum—in a vibrant performance as The Grandmaster—, and the wonderful complementary performances of Tessa Thompson as Valkyrie and Mark Ruffalo, in a more active supporting role as Bruce Banner/The Hulk.


This third and final installment of Thor remains as aesthetically beautiful as its predecessors, but it is also immensely more entertaining. They haven't taken themselves too seriously, and the movie is much better for it. They have humbled Thor by making fun of him and however dark this film is, it is very much a fun fest. 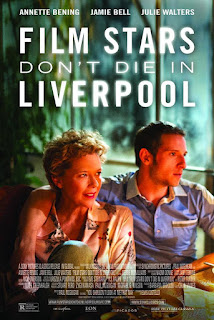 Film Stars Don't Die in Liverpool (2017), (♦♦♦♦): film actress of the 1950s, Gloria Grahaeme (Annette Bening), is working in Liverpool as a theater actress in 1979. She meets young actor Peter Turner (Jamie Bell), and what begins as an invitation to drink and dance, heats up into a passionate love affair. As the romance becomes serious, Gloria values Peter's support, but their love will be tested in ways they could not have foreseen.


I was expecting an average movie before I started watching Film Stars Don't Die in Liverpool, maybe that's the reason why I waited almost a month to see it. What I got in this outstanding drama, about an unconventional love affair, was one of the most understated and under the radar gems of 2017. It has the vivacity of Being Julia (also about an aging theater actress) at the peak of the affair but ends up with a punch in the gut that you won't see coming. You'll likely need a recovery anything to shake the emotions this movie might stir in you, at least I did.


Film Stars Don't Die in Liverpool is pure artistry from beginning to end, from scenes in which Peter watches through a window or a lighted hall to evoke a memory, to the opening or closing of doors to snap out of it. The film takes place more or less in two timeframes: 1979 and 1981, using flashbacks often and switching both characters' perspectives to tell the story. The result is a smooth narrative with lively music and two of the most notable performances, not just of 2017 but, of any given year.


I think I have seen Jamie Bell in just two movies: as a child actor in Billy Elliot, and in The Eagle, a fairly average adventure opposite Channing Tatum. From watching those movies, I wouldn't have guessed he was able to portray and convey that range of emotions. It isn't easy for any actor to keep up with Annette Bening in top form, yet he did it seemingly effortlessly.


That Annette Bening has not won an Oscar yet is beyond me. The Academy missed that train in three occasions, for Bugsy, American Beauty, and Being Julia. She should have won for the latter above the boring Hillary Swank, the second time around. In Film Stars Don't Die in Liverpool, Bening delivers yet again that kind of performance that comes to some actors maybe only once in their acting careers, and she didn't even get an Oscar nomination (!)


Watch this film for the artistry, for the career defining roles, and for the roller coaster of emotions that come with watching great filmmaking. 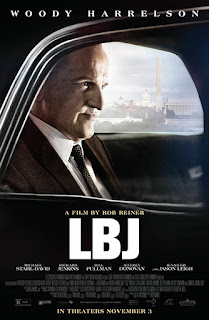 LBJ (2017), (♦♦♦): Being up to that point the U.S. Senate Majority Leader, Lyndon Baines Johnson announced his intention to run for President in 1960. John F. Kennedy won the nomination of the Democratic Party, and asked, against his brother's counsel, Lyndon Johnson to be his running mate. They won by a narrow margin against Richard Nixon, and JFK immediately threw himself into the task of putting before Congress the Civil Rights Bill, one of his major campaign promises. As Bobby Kennedy was a powerful influence in his brother's administration and didn't see eye to eye with Lyndon Johnson, the latter was increasingly relegated to the vastly thankless job of Vice President, until the events in Dallas altered the course of Kennedy's Presidency and the country's.


Within the library of presidential biopics, LBJ is just an average one. It is well acted by Woody Harrelson as Johnson, but it is neither a career defining role nor a groundbreaking film. That being said, I think it succeeds in shining a favorable light into the inner life as well as the public persona of the man who led the nation during such tumultuous times, and gives a different perspective (not so favorable, in my opinion, of the Kennedy brothers in the White House). I wasn't a fan of the multiple switches of years and settings at the beginning of the story; it was dizzying and confusing, but once the story passed the events in Dallas, it became a linear narrative to the end.


That—despite having strong opposition in Congress— Lyndon Johnson was able to sign the Civil Rights Act into law and thus able to cement a legacy for his presidency as well as for his predecessor's, is commendable. The movie makes a strong case on that point, as does on Lyndon Johnson's apparent lack of conviction on the rights that people of color should have had before the law. LBJ implies that Lyndon Johnson favored the Civil Rights Bill out of practical concerns and less out of political fervor. I do not know if that depiction is accurate, but based on his opinions in the movie, it's a plausible scenario.


I know nothing about Lyndon Johnson's life and political career, thus I would like to read his biography by Doris Kearns Goodwin. Hopefully it provides a balanced view of the man and his times.


While LBJ is not a powerful cinematic experience by any means, it’ll give a view into the man and his times that may be enlightening to some, at least that was the case for me.
2017 movies movies reviews snapshots