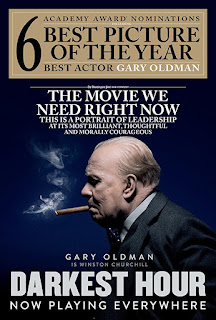 By May 9, 1940, the German army had been advancing throughout Europe mostly without opposition; they had already invaded Czechoslovakia, Poland, Denmark and Norway. Millions of soldiers were posed to strike at the Belgium border, ready to conquer the rest of Europe. In Britain, the opposition had lost faith in the ability of the Conservative PM Neville Chamberlain of guiding the country through the dark days ahead, and the House was desperately searching for a replacement that would be energetic through war time, if it came to that.


Director Joe Wright peppers, from beginning to end, this film with black and white historical footage (of the German army advancing through Europe without opposition, of German weaponry, and Hitler’s speeches) that contribute to enhance the movie experience as much as other elements of the film.


Perhaps as remarkable as the performances of the whole ensemble is the musical score that underscore tense scenes, and the masterful use of lighting, as in a theatrical production in which the use of direct or indirect light highlights the action. The latter element is used to great effect throughout the movie, as are the close-shot camera angles, with use of small windows to frame face shots, and the use of noise (e.g., loud tapping of a typewriter's keys, the highlighting of specific words as they are being typed, and the loud drop of the counting calendar as the days pass) to signify the heaviness and gravity that come and go with each passing day. 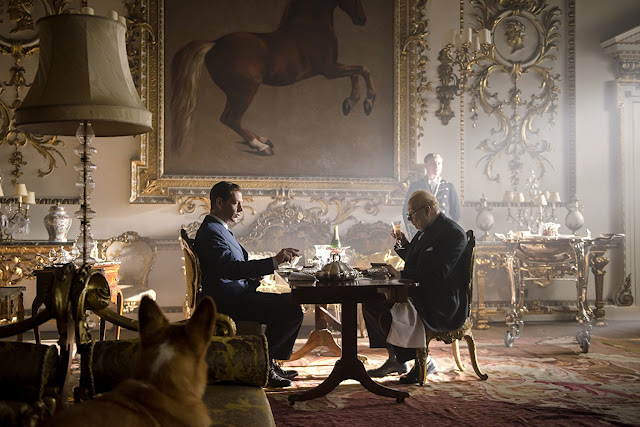 Most of Darkest Hour is shot indoors, while the most intense scenes, dramatically speaking, unfold in the underground offices that house the war council. Despite the overabundance of indoor scenes, more than claustrophobic Darkest Hour feels surprisingly intimate, as if the audience has been given a prime seat to the inner workings of a war time government.


Despite the seriousness of the days portrayed in the film, there are scenes peppered with humorous undertones and some laugh out loud moments that give the audience a needed relief from the full immersion in the politicking and drama, some provided by a spot-on Kristin Scott Thomas as Churchill's wife. It seems that the real Clementine Churchill had a sobering effect on her husband, both by speaking her mind and giving much needed doses of wisdom when asked. That comes across perfectly in this film. 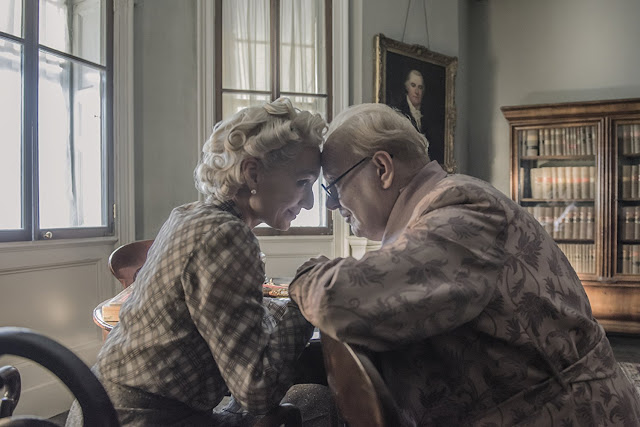 The fact that Gary Oldman was able to portray so amazingly as much the leader as the statesman, and very much inhabit the character (i.e., become Winston Churchill) is remarkable. Oldman infused his character with vulnerability at the right times, with strength of character, and the forceful persona characteristical of Churchill. That was a tall order, and Oldman fulfilled it flawlessly. In that regard he very much reminds me of Daniel Day Lewis's portrayal of Lincoln.

I cannot avoid the inevitable comparison to the earlier 2017 film, Churchill (See Snapshots - #29) a fictional  reenactment of the preparations behind the invasion of Normandy. Churchill also boasted of a wonderful performance by Brian Cox as the title character. Unlike Churchill, in which the leader was portrayed more or less as a functional alcoholic with serious self-doubts—about his leading abilities and the questionable success of the upcoming operation— Darkest Hour is very much grounded by a solid and truer to life screenplay that hints at Churchill's taste for liquor, but very much a leader in control, though with the obvious self-doubt that comes from not having the full support of his own political party.


Gary Oldman was nominated to the 2018 Oscars in the Best Actor category. He won it, and also swept in the same category in all the other award shows of the season.


[Clemmie]: “You’ve wanted this your entire adult life.”
[Winston]: “No. Since the nursery. But do the public want me?”
[Clemmie]: “Well, it’s to your own party to whom you have to prove yourself.”
[Winston]: “Ah, I’m getting the job only because the ship is sinking.”
It... It’s not a gift. It’s revenge.”

[Winston]: “One should have had power when a young man. When wits were sharp. Sinews strong...When youth departs, may wisdom prove enough.”