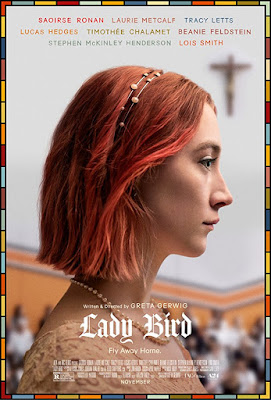 Christine “Lady Bird” McPherson (Saoirse Ronan) is a teenager with a strong personality. Even though she likes to hang out with her mom, they don’t fully “get” each other, most likely because of the fact that they are more alike than they would like to admit. Her mother Marion (Laurie Metcalfe) is an equally strong-willed, opinionated nurse at a psych ward. She is keeping the house afloat since Larry (Tracy Letts, of Homeland and Indignation fame), her husband and Lady Bird’s father, lost her job in the post 9/11 economic downturn.


“Lady Bird” looks down upon most things in her life: the lack of enough money to afford nice things, her “not good enough house” that is, literally, located on the wrong side of the tracks, her home city of Sacramento—she would rather live in the Northeast, and plans to apply to colleges as far away from home as possible—, and her Catholic education. It may take a sobering dose of consecutive mistakes to make “Lady Bird” fully comprehend that she loves her family (especially her mother), her best friend, her home, and her beliefs, fiercely.


Written by Greta Gerwig (of Frances Ha and 20th Century Women fame), also in her directorial debut, Lady Bird is a vibrant and highly entertaining contemporary tale that not only explores the complexity of female relationships, but it is also an ode to family, the place we call home, and the beliefs we take for granted. Lady Bird is an authentic, heartfelt comedy with great quotes courtesy of a gifted, award-nominated screenplay, and plenty of laugh out loud moments. Surprisingly, the ending is emotionally validating, showing that sometimes after the longest journey life takes us full circle. 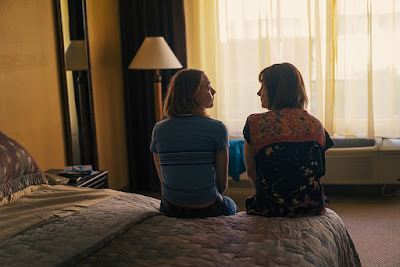 As strong as the direction and the screenplay are the performances of the ensemble cast, especially Saoirse Ronan’s as “Lady Bird” and Laurie Metcalfe’s as Marion (“Lady Bird’s” mother). Laurie Metcalfe (Sister Jackie of Roseanne fame) is an experienced actress who delivers a powerhouse performance for which she was nominated to the Academy Awards as Best Supporting Actress. She lost to Allison Janney for her turn in I, Tonya, but in my opinion, that Oscar belonged to Metcalfe. Metcalfe’s character was a force of nature, and she ably conveyed its complexity.


Just as outstanding is Saoirse Ronan’s performance for which she was nominated to the Academy Awards for Best Actress. Ronan has the gift of disappearing into her characters, mining their inner world and being able to convey it exceptionally. She is quickly becoming an actress that delivers consistently notable performances in everything she stars in; her turns in Atonement, Hannah, and more recently Brooklyn, are proof of that.
2017 movies Greta Gerwig Laurie Metcalfe movies reviews Saoirse Ronan