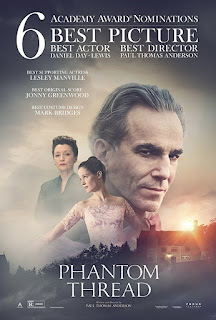 Reynolds Woodcock (Daniel Day-Lewis) is a consummated dressmaker to movie stars, socialites and royalty. He is a lifelong bachelor who runs, along with his sister Cyril (Lesley Manville), the renowned House of Woodcock in 1950s London. Reynolds has the makings of a genius. He works feverishly and prides himself of keeping strict control over his personal and professional life. All that changes when he falls in love with Alma (Vicky Krieps), the woman it seems he has been waiting for his whole life. In Alma, Reynolds finds his muse, but beneath the surface cracks begin to appear as his confident persona starts to unravel.


With a running time of 130 minutes, Phantom Thread is written, directed, and produced in part by Paul Thomas Anderson (known for The Master and There Will Be Blood), and star Daniel Day-Lewis (Reynolds Woodcock), Vicky Krieps (Alma, Reynolds’ muse and lover), and Lesley Manville (Cyril, Reynolds’ sister). 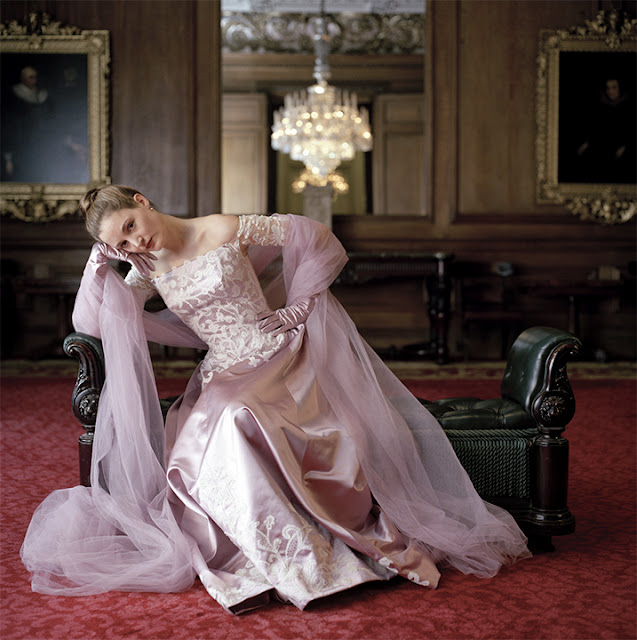 Phantom Thread has some technical achievements of note, among which are the sumptuous costume designs and makeup. Another notable element, perhaps as much as the script and the performances, is the musical score, which is an organic, breathing part of the story. Piano pieces, violin notes and light orchestration underscore the scenes in which Alma and Reynolds’ love affair runs smoothly. However, dissonant instrument accords as well as pizzicato notes prevail over the scenes in which there is tension, disagreements and discord.

Phantom Thread is a successful, slow-burning character study on obsession and the nature of genius. That the actors are able to convey the complexities and nuances of their characters so brilliantly, is proof of a great screenplay. The script has given the actors a solid framework from which to expand their characters’ inner world, and all three leading actors have done so superbly. 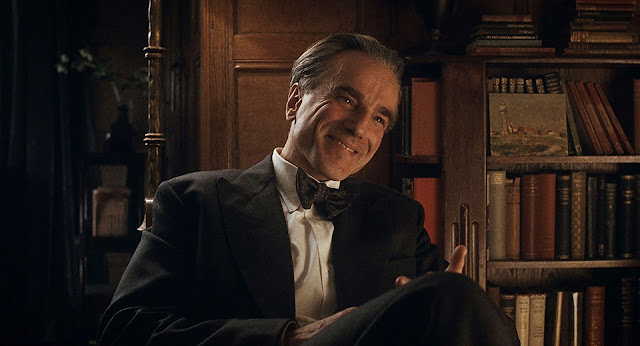 While I can’t say that Daniel Day-Lewis’ performance is on the same level as in Lincoln, in Phantom Thread he retakes the subject of genius—not the political kind, but an equally challenging one. Day-Lewis makes you feel every stage of love—the infatuation, the romancing. He ably portrays the Cinderella phase in which he makes the woman he has fallen for, his professional muse.

Obsession takes hold because, after all, Reynolds Woodcock is a man who has more or less been able to have a hold on his emotions for most of his life. Daniel Day-Lewis brilliantly breathes life into that side of his character as well as he does the bully. He also portrays the tender, open side of Reynolds at his most vulnerable with enormous sensibility. To say that in his moments of annoyance and frustration Day-Lewis makes you feel every jarring distraction—coming from sizzling food in a pan, the slowly pouring of water from a jug to a glass, the scraping of putting butter on a toast– is an understatement. 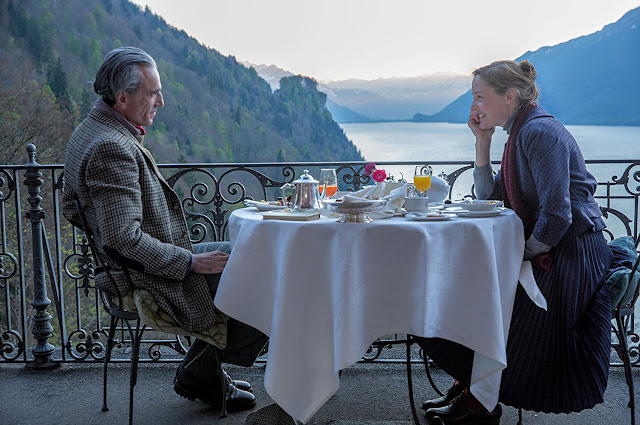