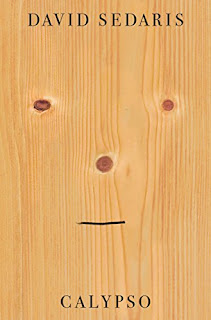 Calypso by David Sedaris, is a collection of twenty-one essays—digressions really—on a variety of topics, whose underlying themes are aging, mortality, and relationships (with his own family and his partner of thirty years).

Most essays are funny, some outrageously so, written in a very accessible language and style, as if Sedaris were having a conversation with the reader. A gifted storyteller, Sedaris has directed a camera lens inward as much as towards others. The result is a very polished work—vivid, candid, and heartfelt—that shines a light on the microcosm inhabited by David Sedaris and his loved ones. They are one imperfect yet utterly fascinating family to get to know.

My favorite essays in the collection were Little Guy, The Perfect Fit, The Silent Treatment, Untamed, and The Comey Memo. The first two were outrageously funny while the other three were heartfelt and wonderfully evocative. My least favorite essays were Stepping Out, A Number of Reasons I’ve Been Depressed Lately, and Why Aren’t You Laughing? In A Number of Reasons I’ve Been Depressed Lately, Sedaris introduced his politics, the lowest point in the collection in my opinion. The essay had no universal appeal, which is something most authors strive for (or should anyways), but I can’t criticize him for having the courage to lay out his political ideas regardless of how they were going to be perceived. With Calypso, I have become a David Sedaris’ fan and will definitely be reading more of his work.

Below I provide some notes and summary of the essays in the collection:
Company Man: Sedaris talks about the pros and cons of middle age and reminisces about family visits and the death of family members.

Now We Are Five: Subdued tone. Introspective and heartfelt.
The Sedaris family had six children. Tiffany, one of the them, committed suicide after struggling with addiction and depression since her teenage years. She avoided family vacations and, at the time of her death, she hadn’t talked to her brother David for eight years. The relationship dynamics of Tiffany with her siblings was fractious. At a family gathering after her passing, they wondered, piecing together their memories of her and her torn photographs, if they had missed any signs.

Little Guy: Sedaris wonders about people’s heights and the way he has been referred to in print, as well as about the things that people blurt out to one another when they are angry. These digressions stemmed from thinking about actor Rock Hudson’s height after watching the movie Giant.

Stepping Out: an homage to his obsessive relationship with his Fitbit.

A House Divided: an essay on class differences and family. He talks again about his late sister’s mental decline.
The Sedaris siblings and Hugh visit again ‘The Sea Section’—their new vacation property in Emerald Isle, North Carolina—six months after Tiffany’s passing, and learn from Lisa the content of Tiffany’s toxicology report and her official cause of death.

The Perfect Fit: Honest, self-deprecating, and outrageously funny.
David and two of his sisters love shopping. On a trip to Japan, they go crazy at their favorite store. They buy a lot of items however impractical they may be.

Leviathan: Introspective as he talks about middle age, and how loved ones may be remembered once they are gone.

Your English Is So Good: Sedaris talks about cultural differences and phrases that people use the most, saying things that convey nothing.

Calypso: on the can of worms that opens up when one goes from doctor to doctor searching for whatever is wrong.
Sedaris had a lipoma (fat tumor) removed, in the middle of the night, by a doctor he briefly met during a press tour. He got his tumor in a bag after the procedure was completed and planned to feed it—on Thanksgiving vacation—to a big snapping turtle that inhabited a canal in Emerald Isle. Three kids, who also fed the turtle, told him that they had dubbed it Granddaddy or Godzilla, and that it was hibernating until spring. Sedaris felt like that turtle of his had a double life with other people.

A Modest Proposal: Sedaris talks candidly and with humor about his sexuality and the elation he felt when the U.S. Supreme Court ruled same-sex marriage legal.

The Silent Treatment: Beautiful, heartfelt homage to the difficult, yet strong bond of Sedaris with his father. One of the most endearing and vivid essays in the collection.
Growing up, Sedaris felt that his father did not like him much. Still, they shared beauty in the form of jazz listening. When the music stopped, they shared companionable silence. That bond was unique to them, for no other Sedaris sibling shared the love of jazz with their father.

Untamed: Adorable essay about the bonds that we form with animals. It reminded me a great deal of the novel How to be Human by Paula Cocozza about a young woman in love with a fox.
Sedaris talks about a fox he nicknamed Carol, who used to visit the backyard of his house in Sussex, England. He used to feed Carol all sorts of goodies. They even found each other on the road from the neighboring village late one night and walked home together in the moonlight. Carol disappeared after that. Though David harbors hope that she may come back, Hugh tells him that it is highly likely that Carol ended up killed for territorial reasons.

The One(s) Who Got Away: Sedaris asks Hugh, his partner of thirty years, how many men came before him, then he wonders, based on the number, how come neither got AIDS back when hardly anyone knew what it was and its mode of transmission.

Sorry: funny essay about the idiosyncrasies of the Sedarises vs Hugh’s family, a digression from the board game Sorry!, which the family often plays when they are on vacation.

Boo-Hooey: Sedaris doesn’t believe in ghosts, or like people talking about them. He is, however, visited by his mother and sister Tiffany in his dreams, and they have conversations about how life is going for him at that moment in time.

A Number of Reasons I’ve Been Depressed Lately: Sedaris explains that he expected Hillary Clinton to win the 2016 U.S. Presidential Election and was blindsided when Trump won. Now there are at least ten reasons why he feels depressed.

Why Aren’t You Laughing?: Sedaris talks about people’s expectations, as well as his own, when they know he is writing a new book. He also digresses from a TV series he has watched named ‘Intervention’ to his mother’s alcoholism and how no members of his family ever confronted her about it.

I’m Still Standing: on the indignities of middle age and what lies beyond when your body starts betraying you.

The Spirit World: Amy Sedaris believes in things bordering the incredible, like psychics. Riding in the car with Gretchen and David—on their way to ‘The Sea Section’—, Amy describes a session she recently had with a renowned psychic in which she “was contacted” by her mom and Tiffany.

Sedaris remembers, not without regret, how his sister Tiffany went to see him after a successful presentation of his, and he asked the doorman to close the door on her face. They hadn’t talked in four years and, after that night, didn’t see each other again. In another four years she would be dead.

And While You’re Up There, Check On My Prostate: Sedaris never learned to drive, thus he has missed out on cursing at others for driving infractions. However, he has noticed that, in some parts of the world, cursing has become an art form.

The Comey Memo: Hugh finds out, through a realtor friend, that James Comey—former FBI director fired by President Trump—was staying a few houses away from ‘The Sea Section’ in Emerald Isle. The news spread like wildfire, mostly due to Sedaris. After Comey’s visit, which they missed, life went back to normal, except that Sedaris’ elderly father couldn’t join them because he didn’t have anyone to drive him there. On his way to the airport, David paid his father a visit and was taken aback by the condition he was living in.
2018 books books reviews David Sedaris Nonfiction books