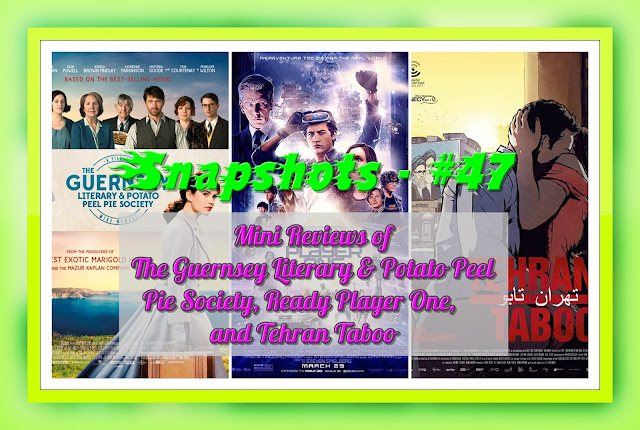 The Guernsey Literary & Potato Peel Pie Society (2018), (♦♦♦♦): I learned of this Netflix production through blogger friend Susan @ The Cue Card, who raved about it in one of her most recent posts. I never read the book because the long title didn’t speak to me, and THAT title... it is simply a mouthful! My loss I guess, but since a few favorite actors of mine star in the movie adaptation, I just couldn’t miss it in a million years. I’m glad I gave it a chance, title and all. 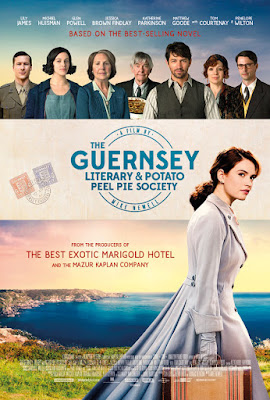 The story stars in 1941, during Nazi occupation, in the Island of Guernsey in the English Channel. Four neighbors (Dawsey Adams, Eben Ramsey, Isola Pribby, and Elizabeth McKenna) are returning home at night from a gathering, carrying illicit food, when they are stopped by a Nazi patrol. To avoid explaining the illegality of their meeting and the food, and producing identification papers they are not carrying, they awkwardly come up on the spot with the idea that they are members of a book club, The Guernsey Literary & Potato Peel Pie Society. Just like that, a literary society is born, and friendships are forged over everyday happenings and sharing food and drinks.


London, 1946... Young writer Juliet Ashton is promoting her latest book, which has met with moderate success. Juliet’s editor proposes that she writes an article for The Times, this time in her own voice—not that of her famous character, Izzy Bickerstaff. She promises to think about it. Then, she receives a letter from a stranger, a certain Dawsey Adams, who claims to have come upon her address handwritten on a book he loved to read during the war. Will she be able to provide the address of a bookseller who sells a copy of that book? Juliet tracks a bookseller who sells the desired book and she sends it to Dawsey, free of charge, along with a reply letter. Just like that, Juliet and Dawsey start exchanging letters in which they discuss the happenings of the Guernsey Literary Society and its members. 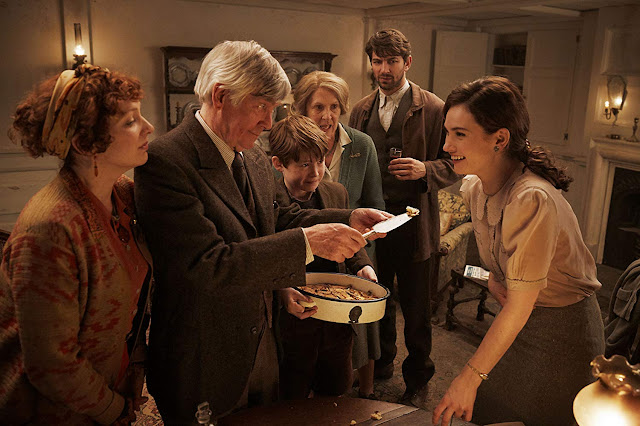 Juliet feels that she would like to know more about the everyday lives of these islanders. Perhaps she could write about the sobering effect that books had for them during the war years, if they let her. Thus, she invites herself to one of their Friday meetings. The current members of the society: Amelia, Dawsey, Eben, and Isola, along with Eben’s young grandson, are ecstatic to have her, and ask Juliet to read for them from a Brontë biography she had written earlier in her career. They have a spirited discussion, they bond, and it is only after that Juliet reveals the true purpose of her visit. Amelia is outraged. She does not want Juliet to write about their wartime experiences.


The mean-spirited landlady from the local hostel tells Juliet that those people are not what they seem. Little by little, between informal conversations with the literary society members, and her own research, she puts together the truth of what happened to these islanders during the war, and how they came to lose one of their own. The ripples of those findings will be felt in Juliet’s life as well as theirs. 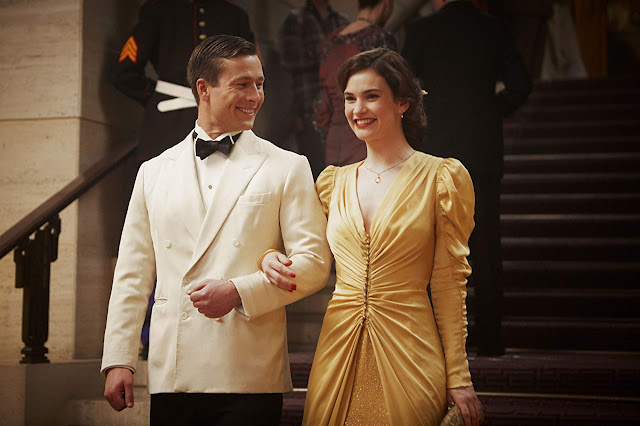 The Guernsey Literary... has beautiful costume designs, as well as excellent cinematography and photography that use views of the stunning British coast to its advantage. 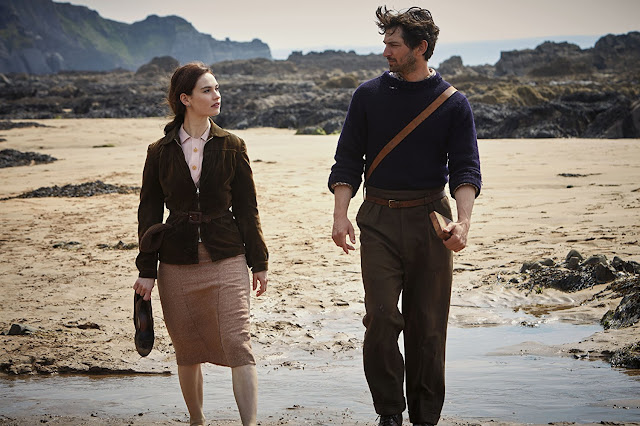 The characters are endearing, and one ends up caring for their fates. The format of the source material (letter exchanges) lends itself well to a movie—it reminded me of 84 Charing Cross Road, from 1987, starring Ann Bancroft and Anthony Hopkins, which unfolds in a similar format—, particularly one in which discreet bits of information, surrendered in all manners, put together answer the puzzle of what these characters underwent during wartime. It is a story full of darkness, as are most WWII stories, and daring, as these folks put up some resistance against the occupation force and the collaborationists in town. For their defiance, these characters pay a dear price, and they bear psychological scars to prove it.

There is great chemistry among the ensemble cast, especially between Lily James and both leading men. The ending is as endearing as the overall story, and ends up in a romantic note, which I loved. 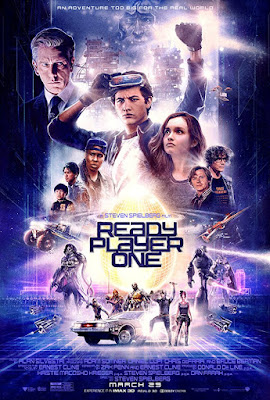 Ready Player One (2018), (♦♦♦): Year 2045... Columbus, Ohio, the fastest growing city in post-apocalyptic Earth. Most of Earth’s population spend their waking hours in a virtual world, known as OASIS, invented in 2025 by creators James Halliday and Ogden Morrow. Halliday, the force behind the invention, inserted what is called in the business “an Easter Egg”. He hid an object in the OASIS that gives special powers to whomever discovers it. The first person to find the egg will inherit Halliday’s stocks in “Gregarious Games” (his company), as well as total control of the OASIS.


In the form of his avatar (Anorak the All-Knowing), Halliday created three hidden challenges for worthy traits, three hidden keys that unlock three magic gates behind which the magic prize awaits. Only the ones with the skills to survive will reach the end. 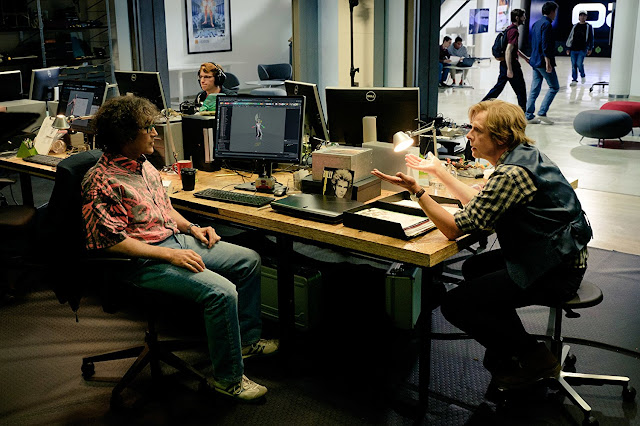 Eighteen-year-old Wade Watts spends his waking hours, like most people, in the OASIS. Parzival is his avatar. Parzival loves to spend time fighting in Planet Doom—the most dangerous place in the OASIS, along his best friend Aech, someone he has never met in real life. He is also in awe of a girl named Art3mis, a legend for being “Goddess of the Hunt.” Art3mis is as elusive as she is cunning.


Parzival is “player one”. He wants to win the game with no purpose in mind. Art3mis wants revenge against Nolan Sorrento—Head of IOI, a company intent on world domination and population enslavement—, responsible for the death of her father at a “loyalty center”. Avatars Parzival, Aech, Art3mis, Daito and Sho will join forces in the virtual world and in real life to defeat Nolan Sorrento’s evil plans for the Earth’s population.


Ready Player One, the movie, is one giant nod to pop culture, one reference after another; if it has made a splash in pop culture, it appears here: Duran Duran’s and Thriller’s outfits, Stayin’ Alive dance from Saturday Night Fever, a Rubik cube, Jurassic Park’s dinosaurs, Iron Giant, Godzilla, King Kong, Stanley Kubrik’s The Shining. In the manner of the original Legends of the Galaxy, Ready Player One has an eclectic soundtrack made up of stellar pop and rock songs that give the movie coolness factor.

There is great world building, characteristically of most Spielberg’s sci-fantasy movies, but it lacks charm. Ready Player One is too bombastic for its own good. Too computerized. The emphasis has been placed on expensive-looking special effects, with zero attention to character development. The movie has the feel of a video game; the environment in which the story develops is, after all, a video game. I also feel that the plot is too complicated, and not necessarily an interesting one. Maybe the problem resides with the adaptation and is not inherent to the novel.


Ready Player One looks cool and no doubt will appeal to younger audiences more than it will appeal to selective movie-goers. There is nothing wrong with that, except that this movie won’t transcend in any way, unlike most of the director’s other iconic films. 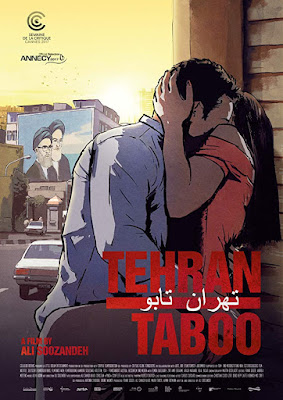 Tehran Taboo (2017), (♦♦♦♦): Pari is a young prostitute in contemporary Tehran. She has a five-year-old kid named Elias. Pari dispenses sexual favors to make a living, and has at least a steady customer: Judge Adel, from the Iran Revolutionary Court. Judge Adel is a special client, for he will likely accept the submission of her divorce papers without the consent of her husband.


An addict husband, in jail after dodging a death sentence, refuses to sign his wife’s divorce papers. The judge won’t review the papers without the husband’s signature. However, he can make special accommodation for the woman because “he wouldn’t mind her company.” She becomes the judge’s lover, with the hope that he will give some attention to her divorce papers given some time.


Sara is an expecting mother. She is married to banker Mohsen. Mohsen is ecstatic about Sara’s pregnancy; she, not so much. She wants some independence, to work outside the home, for which she needs authorization from Mohsen. To protect her pregnancy, he refuses to give it.


Babak is a young musician. While working at a disco, he becomes entangled with a young woman. They have a wild night of sex and drugs. The next day she contacts him to ask him for money for an operation to restore her virginity. She is about to marry, and if her fiancé finds out she is not a virgin, both her and Babak will likely be killed. Babak promises to come up with a solution that refuses to present itself.
The lives of all these characters will collide in unexpected ways. 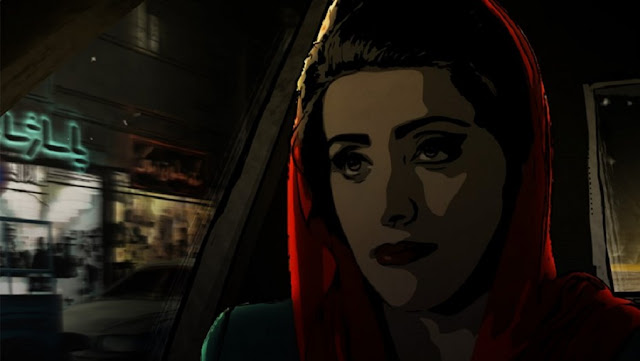 Written and directed by immigrant Iranian filmmaker Ali Soozandeh, with a running time of 96 minutes, gorgeously animated, though not expensively so, Tehran Taboo is a powerful drama, with dark humorous undertones and some laugh out loud moments, in a very deceptive package. I say that because, typically, adults don’t watch animated tales if they can choose another format, but I assure you, you would miss a great story depicting life in contemporary Iran, oriented towards adult audiences, with characters that you care about—some you love to hate—, with an unusual, quite unexpected social and political message, and above all, a devastating ending. This is the kind of movie that haunts you long after is over.
2017 movies 2018 movies movies reviews snapshots