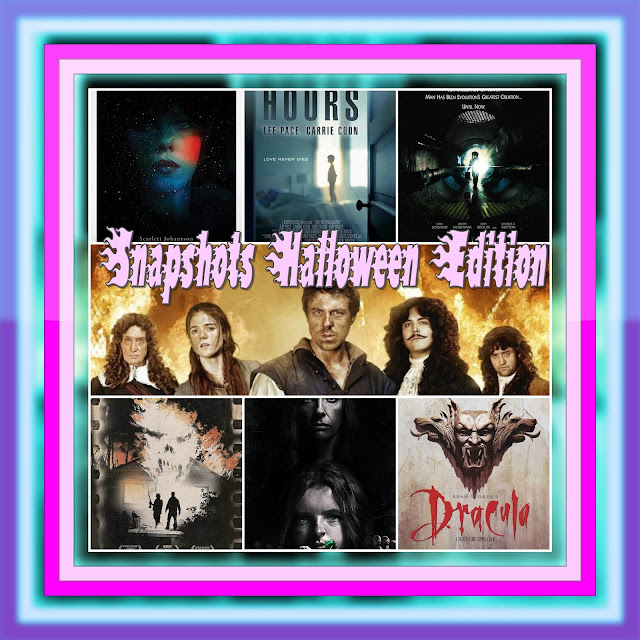 The Great Fire (2014), (♦♦♦♦): September 2nd, 1666. London.
Tom Farriner (Andrew Buchan) is a widower baker, with two young daughters, living in Pudding Lane. He is assisted in the bakery by his sister-in-law, Sarah (Rose Leslie, Ygritte of Games of Thrones fame), whose husband was enlisted in the Navy and is presumed missing in battle. Sarah’s young son, David, helps by delivering the bread. Tom’s bakery has a contract to bake bread for the Navy while England is at war with the Dutch, but funds are not immediately forthcoming and they have just run out of flour. Tom is in love with Sarah. He secretly harbors the wish that his brother doesn’t return. In a moment when he goes to visit Sarah to deliver a leg of mutton he had roasted for her, Hannah, one of Tom’s daughters, who had been left in charge of the oven in his absence, is distracted and a spark flies out of the oven igniting hay on the floor. At that time Hannah is on the second floor lulling her sister Mary to sleep, thus, the spark becomes a flame, and by the time that Tom is back, the house is on fire and his girls have to escape through the ledge of the upper floor’s window.

The story becomes complicated at that point because Sarah has been befriended by a man from church, a man who turns out to be Lord Denton (Charles Dance, Tyrwin Lannister of Games of Thrones fame), His Majesty’s Head of Intelligence, whose interest in Sarah has to do with her employer, the Duke of Hanford—rumored to protect every Catholic seditionist in the realm. Lord Denton suspects that the Duke of Hanford may be conspiring against the King, which turns out to be true, with bad repercussions for Sarah, her kid, and Tom’s family. 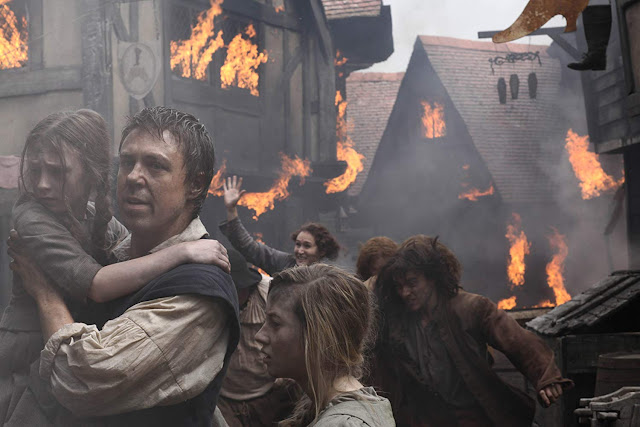 I seem to have been fonder of this historical drama PBS miniseries (4 episodes of 1 hour each) than most viewers were. The average on IMDb page was 6 stars / 10. I liked it very much. I agree that its emphasis was more on the supposed plot against King Charles II’s life—the investigation to uncover the participants and choosing a scapegoat—than it was on the fire itself, but I it kept my interest throughout and the tension never waned.

For a miniseries that it is mostly about London’s Great Fire of September 1666, a lot of peripheral events take place that pull in the viewer and don’t let go until the final episode in which things come to a satisfying conclusion. The Great Fire can boast of having great actors in solid roles, with characters whose fates I was invested in. The historical background is, again, solid, as the fire occurred during King Charles II’s reign, whose father had been beheaded by the discontent populace. Charles II (Jack Huston) feared something similar could happened to him, a fear stoked by his Head of Intelligence, Lord Denton. The kingdom was at war with the Dutch and funds were scarce. 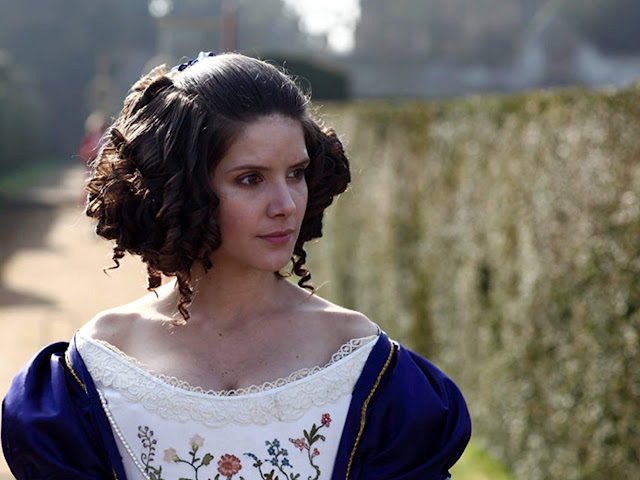 Meanwhile, the King was wasting resources in a lavish lifestyle that England could ill afford. The Queen, Catherine of Braganza, had been unable to produce an heir, and had been sidelined by Charles’ many mistresses. The King’s brother, James, was conspiring behind the king’s back, with their mother’s approval, to return England to Catholicism, “the true faith”. Arguably, James Duke of York (Oliver Jackson-Cohen) was ready to do away with Charles, if things came to that, but Lord Denton thwarted the plot just in time. However, not content with having solved the mystery, his suspicious nature got the best of him and he wanted someone to blame at all cost.

Pounding action—Lord Denton chasing the men behind the plot to assassinate the King—, and suspense—the fire relentlessly burning for three days and advancing inexorably towards The Tower, which held enough gunpowder barrels in storage to obliterate what was left of London and claim more lives—are the miniseries’ highlights, as is political intrigue of the highest order, and a Monarch that found his footing, and his destiny, in adversity.

Movies...
I screened a total of six movies for this challenge looking for the perfect match to blog about. Most of these movies confounded me in one way or another, reason why I was not completely crazy about them. Instead, I offer brief glimpses into each one of them.

Mimic: Director’s Cut (1997), (♦♦♦): A terrifying plague is targeting mostly children. A geneticist modifies an insect to mimic the carrier of the plague and attack it. The plague is eliminated but nature rears its ugly head. Now the geneticist has a bigger problem on her hands.

Lavishly directed by Guillermo del Toro, starring Mira Sorvino and Jeremy Northam, I wasn’t a fan of this horror movie, mainly because it looks dated now, and the monster unleashed was a giant cockroach with human-like abilities. There was much talk about genetic experiments and enhancements that added to the plot but were somewhat hard to follow. Giant crocodiles, mega-dinosaurs...those I can believe, but a giant cockroach...? C’mon!

Under the Skin (2013), (♦♦♦): An elusive alien in the skin of a sultry woman prowls Scottish streets luring men to her mysterious abode, where they become trapped in a sort of in-between state.

This movie was the first one of this lot to confound me. I had more questions than answers by the end, and it seems I’m not alone. It is one of the most confounding movies ever according to audiences and critics. Was she a doll with the skin of a woman? Was she an alien? What was the purpose of it all? What’s with the vanishing pool? Who were the motorcycle riders?

Resolution (2013), (♦♦♦): a man brings his junkie friend to an isolated cabin in the midst of a Native American Reservation, and makes him go cold turkey for a week. While there, both experience strange, unexplained phenomena.

From the creative duo that I have come to admire, Justin Benson and Aaron Moorhead, Resolution is the movie that started it all for them. If I had not watched The Endless (See Snapshots - #46) earlier this year, I would probably have liked Resolution a little more, but The Endless explains what began in Resolution, thus the only thing I concluded is that both stories resembled somewhat.

The Keeping Hours (2017), (♦♦♦½): A couple divorces some time after being destructed by grief after losing their only child in an accident. Then, while cleaning the house that his most recent tenants have trashed, the father encounters the ghost of his son, which brings the couple together once more.
The Keeping Hours is more paranormal drama than ghost story per se, though for most of the movie there is a ghostly presence. It was sweet and a little sad, but it’s not what you conjure up when thinking about Halloween, and it wasn’t powerful enough to give it a higher rating.

Bram Stoker’s Dracula (1992), (♦♦♦): A Romanian Count forsakes his church and his god after he comes back from war and finds out his beloved has committed suicide thinking him dead. Centuries later, he meets a beautiful woman, a dead-ringer for his long-lost love, and devices a cunning plan to make her his.

Bram Stoker’s Dracula is a lavish adaptation directed by Francis Ford Coppola, with a star-studded cast led by Gary Oldman as Dracula, and Winona Ryder as Mina. I’m not crazy about vampire stories, and this one didn’t convince me of the contrary, mainly because of Winona’s overly sweet disposition contraposed to Gary Oldman’s over-the-top performance. I never thought I would say that about either one of them. Lavish? Yes, but that’s all this production has in its corner.

Hereditary (2018), (♦♦♦): a family is (sort of) haunted by strange happenings after they lose the aging, once-estranged, matriarch.


I heard so much about Hereditary before watching it, that maybe that’s the reason I was so confounded and founded anticlimactic. I had so many questions that weren’t answered by the strange twists in the story: were they really haunted? What happened to the family, was it real? Was the boy in it the whole time? This one left me seriously baffled, and not in a good way.
movies reviews R.I.P. challenge snapshots TV shows