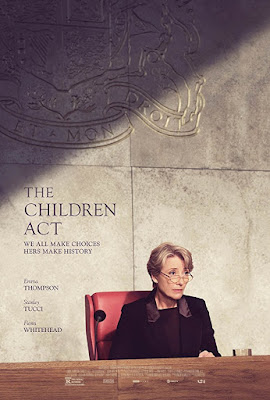 After twenty years, Jack and Fiona’s marriage has reached an impasse. They behave more like siblings than spouses. Fiona is overtired and overworked. Jack has told Fiona he wants to have an affair. Fiona tells him that the time to announce he wanted an open marriage is gone; that it was before the wedding, not twenty years after. If he has an affair, she warns him, their union is over. Jack leaves anyways.


Fiona is a family judge. She is used to ruling over controversial cases. Her latest is one of a Jehovah’s Witness teenager with leukemia who is refusing blood transfusions—that could prolong his life—on religious grounds. Adam Henry is a precocious, and very devout seventeen (and nine months) years old. His blood stats are all over the place because his body is not producing new blood cells and the leukemia cocktail treatment attacks his bone marrow—compromising his immune system, hence the much-needed blood transfusions.


The Henrys—Kevin and Naomi, the parents—argue that “blood is the essence of what it means to be human. Just as life is sacred, so is blood; thus, mixing it with another is pollution, a contamination...It’s rejecting God’s gift.” They also argue that the refusal of the blood transfusion comes from Adam, that he is prepared to die and that it’s by no means a mirror of their thoughts and beliefs. Needless to say, if Adam were to accept the life-saving treatment he would be “disassociated”—cast out from their religious community, which is not bound to happen because, as the Henrys emphasize, Adam is not going to change his mind. 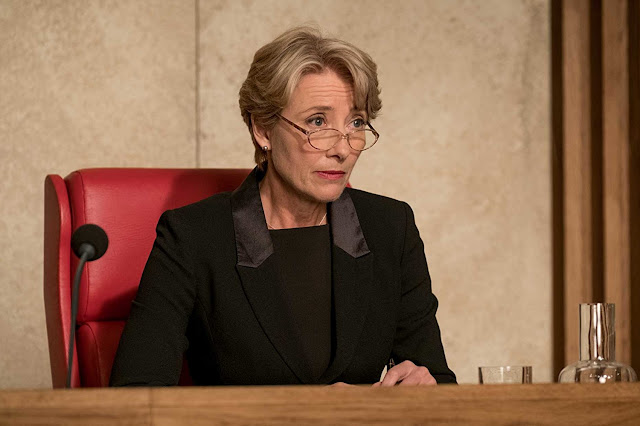 Judge Fiona decides to make a parenthesis in the case and visit Adam in the hospital to know his state of mind. The young man she meets is smart, indeed devout, but admits that he would like a chance at life. Fiona laughs by his side, even shares a song while he accompanies her with his guitar. Fiona rushes to court and rules that the Henrys and the church elders “are acting against Adam’s welfare. That Adam must be protected from his religious views, and that his life is more precious than his dignity.” She rules in favor of the hospital and a life-saving blood transfusion for Adam.


The end? Not quite. Adam’s life is saved. By now he is an adult, but has become religiously unmoored. He fights frequently with his parents. He doesn’t understand how come they were prepared to let him die when he was their only son. Is God and religion a sham? He starts leaving phone messages to Judge Fiona. He follows her on her walk to work and gives her poems and letters he has written. He wants her to know the person he has become, to guide him. But Fiona tells him that he was just one more ruling, one more case that is now over... that he must go on with his life and make the most of it.


Adam is convinced that his cancer will be back. Is he right? And if he is, what will be his decision this time around? 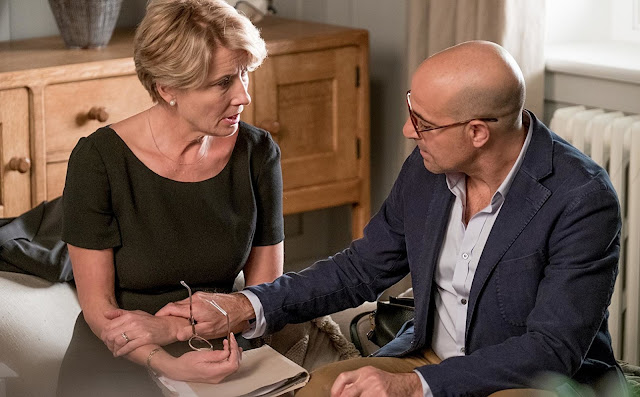 
The Children Act is an astounding film on the strength of its powerhouse performances, which I’ll get to in a moment. The music, the photography, and cinematography are noteworthy, and so is the script, which conveys the simmering tension between Fiona’s career and private life, the nuances of the characters inner worlds, and the intensity of the moral and religious dilemmas at stake. The film is character driven, so it may not be every moviegoer’s cup of tea, but for those who stick with it, the rewards are immense. The Children Act is a haunting drama that carries with it the quiet devastation of Atonement, underscored by subtle and beautiful piano sonatas and light orchestration—original music by Stephen Warbeck—that speak as much without dialogs than the film does with words. Beautiful aerial and street views of London are highlighted, as is city life, contrasting with Fiona’s domestic scenes and the pragmatism of court, and so are beautiful country scenes rushing by through the window of a speeding train. 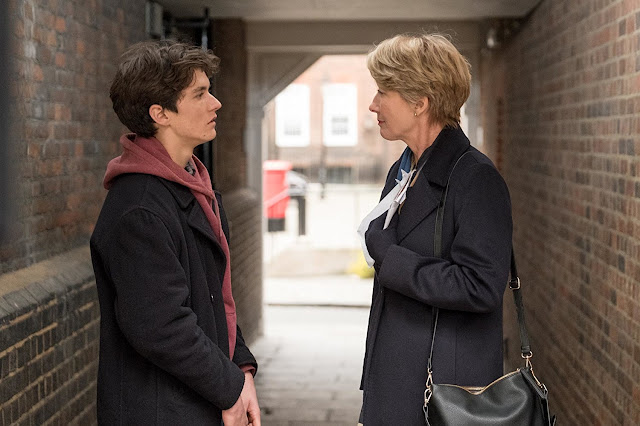 Emma Thompson has a career filled with remarkable performances: Brideshead Revisited, Sense and Sensibility, Howards End, Remains of the Day...In The Children Act she delivers her best performance ever. Period. Thompson’s Fiona is one nuanced character, which she mines to perfection. Thompson’s Fiona is very assertive in her career. She gives snappy legal answers. Her judgements are fair yet invariably controversial, all contrasting with personal doubts about her marriage, her demeanor that of an overtired, overworked person, which she nails to a T. While Jack is away, Fiona stays awake in bed all night, sometimes reminiscing about their happier times. She misses those moments but is incapable of expressing it. Among her fellow barristers she is always centered, always on guard. That protective shell is torn down when she gets to know Adam Henry before and during brief encounters after his recovery. She is as unmoored about her beliefs after those encounters as Adam is after his treatment. To say that Emma Thompson has given her best is the understatement of the year. Come the Oscars, she deserves a nomination for Best Actress.


It is so rare to see a young actor give a performance that matches that of a screen legend, but that is exactly what Fionn Whitehead has done in the role of Adam Henry. He matches Thompson’s nuance with his fiery spirit. During his illness, his makeup makes him look as moribund as the medical experts claim that he is. He is smart, devout—perhaps too fervently so for his teenage years—and willing to sacrifice his life for his religion. It seems that Judge Fiona may have intruded in his rather martyr-like plans of filming a parting video and making his grand exit from this world. After his recovery, he is no longer the same person he was. Adam becomes so unmoored than he no longer believes in God, or does he? He refuses to talk to his parents and to accompany them to Kingdom’s Hall. Life for Adam no longer has the same appeal. To say that young Whitehead makes you feel every stage of his illness and grief is an understatement. There is a particular scene when he follows Fiona to Newcastle where she is staying at a friend’s estate, when he demands answers from her...Answers that either she doesn’t have or is not willing to offer. His performance in that scene makes watching the whole movie worthy. Fionn Whitehead is an actor to watch.


Stanley Tucci is not given much screen time. He brings intensity to his character but there is little room for him to shine or to plead his case as a neglected husband. After all, he is pretty much an afterthought in this story, the counterbalance.


I hope you enjoy this film and its strong performances as much as I did. The Children Act is one under-the-radar gem that should not be missed.
2018 movies Emma Thompson Fionn Whitehead Ian McEwan movies reviews Staley Tucci