Snapshots - #50: Disobedience, Outside In 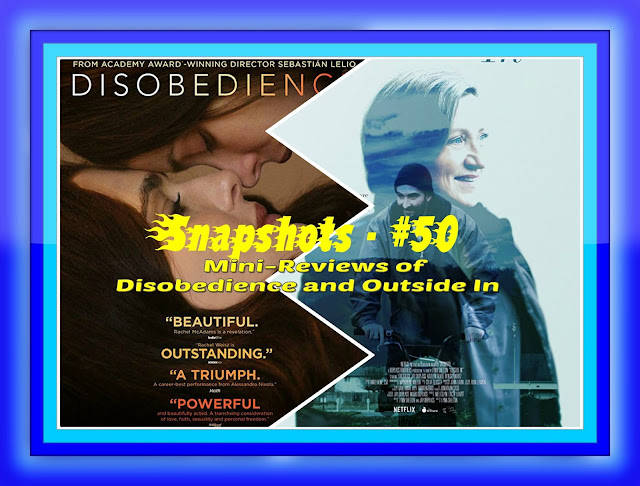 Disobedience (2017), (♦♦♦♦): Ronit Krushka, a.k.a. Ronnie, is a photographer in New York City. We learn that she is the only child of a rabbi, and is estranged from her religious community due to an event in her past, but those things are revealed, little by little, much later in the story. At the start of the movie Ronnie is working on a photoshoot when she receives a phone call from England with distressing news. Her father has died and she must go back. 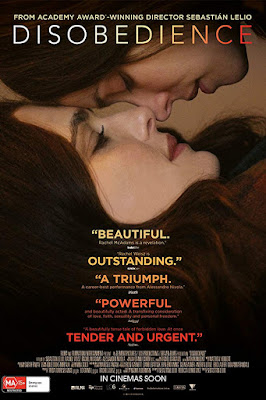 Her first stop in England is Dovid Kuperman’s house, a childhood friend, and heir apparent to Ronit’s rabbi father. Dovid was the child the rabbi wished he had had, and was by rabbi Rav’s side when he collapsed amidst a service. Dovid is awkwardly surprised to see Ronit on his doorstep after so many years, yet he invites her to stay at his house for the mourning and hesped. Members of the community, present at Dovid’s house for prayers, are also wary of Ronit’s reappearance. She didn’t know her father was sick. He didn’t want her to know and Dovid respected Rav’s wishes. Apparently, no one outside of their Jewish community knows of Ronit’s existence, not even the press who reported Rav’s passing.


Ronit’s transgression is only talked about in whispers, which the audience thus far is not privy to. We, along with Ronit, learn that Dovid is now married. Ronit teases him about the identity of his beloved... “Is she one of the old crones?” It comes as a shock to her to learn that Dovid’s wife is Esti, another childhood friend. It is right then and there when the story turns awfully complex and mighty interesting, because Ronit and Esti share a history, one going back to a tryst they had in their teenage years—the Rav walked in on them, causing Ronit to become an outcast from her religious community. Now she is back and sharing the same living space for a few days with her old flame. Dovid assumes that there will be order in his house, but...is he right? 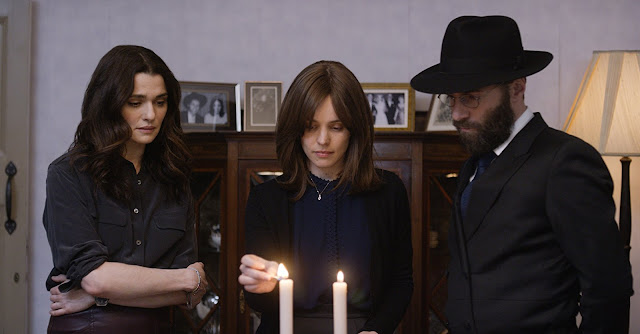 
Devoid of unnecessary adornments, Disobedience lets religion play a larger-than-life role, a powerful device that becomes an organic, breathing element in the story, from the initial sermon about free will, right before Rav Krushka dies at the pulpit without granting deliverance for his estranged daughter, to letting bass Hebrew chants to underscore two of the most emotional scenes in the movie: the one when Dovid is asked to become Rabbi (amidst a complaint of misbehavior against his wife), and the scene at the hesped, prior to the announcement that Dovid will be the new Rabbi, when he is thinking about what has just transpired at home and what he will say in his speech. 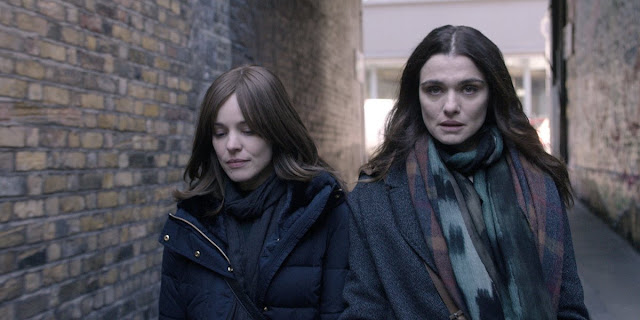 The subject matter and the characters are designed to add layers to the story, and the layers pile up one on top of the other, as the audience learn, little by little, what has happened between these two women in the past and what their lives have become as a consequence of their transgression. For Ronit the result has been banishment. Guilt. Oblivion. For Esti, it has been far more complicated. She had a mental breakdown after Ronit left and Rav campaigned day and night for her to marry Dovid, perhaps thinking that marriage would “cure her”. Ronit’s journey is, thus, one to be accepted as the rightful, only child of the great man his community loved. She refuses to marry, have mandatory sex on Fridays, and lots of children, to validate her role in society. She refuses to comply. Esti has been molded into compliance, but this time she wants freedom... Freedom to decide who and what she wants to be because she was born into a religious community that she didn’t choose. She wants her destiny back in her hands.


Watching Ronit’s, Esti’s, and Dovid’s journeys is an emotional rollercoaster; one of the most powerful movie experiences thus far this year. The strong chemistry between both leading ladies is one that should also be taken into account. Not to be missed!


Favorite quote:
[Rabbi Rav Krushka]:
“In the beginning...HaShem made three types of creatures: the angels, the beasts...and the human beings. The angels he made from his pure word. The angels have no will to do evil. They cannot deviate for one moment from his purpose. The beasts have only their instincts to guide them. They, too, follow the commands of their maker. The Torah states that HaShem spent almost six days of creation fashioning these creatures. Then, just before sunset, he took a small quantity of earth and, from it, he fashioned man and woman. An afterthought? Or his crowning achievement? So, what is this thing? Man? Woman? It is a being with the power to disobey. Alone among all the creatures, we have free will. We hang suspended between the clarity of the angels and the desire of the beasts. HaShem gave us a choice, which is both a privilege and a burden. We must then choose the tangled life...we live.” 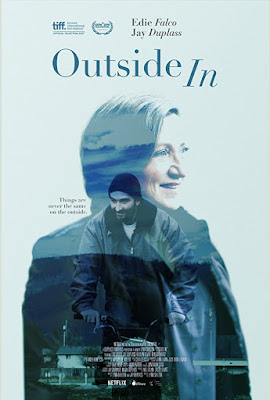 Outside In (2017), (♦♦♦): Snohomish County, Washington... Forty-year-old Chris (Jay Duplass) was imprisoned for twenty years for being in the wrong place at the wrong time. Carol (Edie Falco, of Sopranos and Nurse Jackie fame), his former high school teacher, advocated for him and he was freed on parole. Now that he is free, he is finding he has too much time on his hands. He is living with his brother, Ted (Ben Schwartz)—who disavowed him out of guilt while he was in prison—, and looking for work, without success, in a small city in which everyone knows he is an ex-con.


While Carol was advocating for Chris’ freedom, she more or less forgot to give her family some quality time. Now Hildy (Kaitlyn Dever), Carol’s daughter, and Carol, have a complicated relationship as result. Carol’s relationship with her husband is on a similar trajectory, though for other reasons.


Chris is in love with Carol, the only woman he had contact with while he was “inside”. Carol has refused his advances, though she doesn’t discourage him from spending time with her or Hildy. Quite the contrary, she thinks that Chris’ social world would expand if he allowed more people in, like her family, for example. When Carol promises Chris to spend some time with him so he can get her out of his system, it will unleash events that neither of them had anticipated. 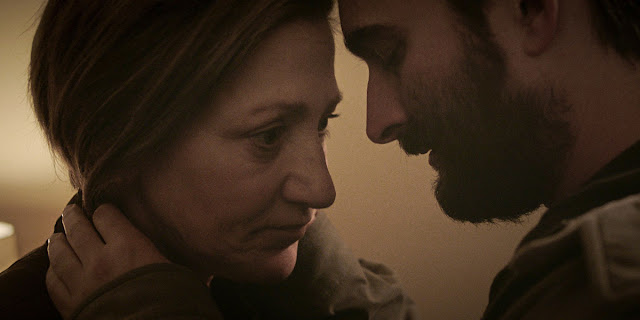 With a running time of 109 minutes, directed by Lynn Shelton, who co-wrote the script with Jay Duplass (the leading man), Outside In is a melancholy meditation on life after a prison sentence, about how relationships in the life-after are affected, and how to adjust to the new normal, messages that benefit from the feminine, light touch of the director.


Relying heavily on melancholy plucking of guitars, occasional jarring notes—to denote anger or frustration—and light orchestration, the musical score underscores the drama, as does the weather, used here like a metaphorical recourse, for it is always gloomy (cloudy, rainy, or after the rain), which suits the mood of the story quite well. Several nightly scenes on solitary roads are used as well. The small cast, usually a sign of a low budget movie, imparts a feeling of intimacy to the plot, as does the clever, and rather theatrical, use of lighting: occasional direct or indirect yellow light highlight heart-to-heart dialogues. Close-up camera shots are used to amplify that effect.


No doubt, in this somewhat “plotless” movie what glues all together is the nuanced, wonderful performances of Edie Falco and Jay Duplass. They make this rather cheerless movie worth seeing and talking about.
2017 movies 2018 movies movies reviews snapshots