While waiting for a red light to change, on his way back to his halfway home, a convicted felon, soon to be out of probation, witnesses an incident that rattles him in the ever-evolving city of Oakland, CA. 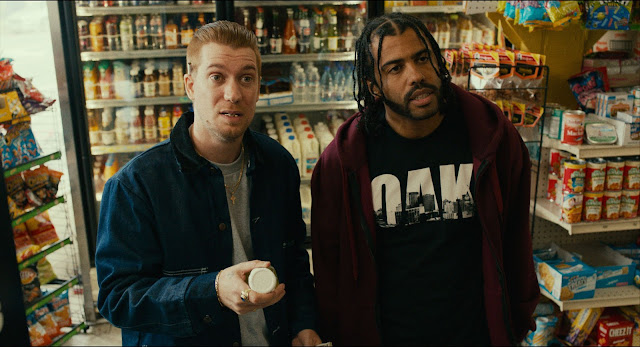 While this film takes its audience back through two specific events of the main character’s life to show us how he got to this point, the movie pretty much unfolds over the course of three days in which Collin is waiting for his probation to end to start a new chapter as a free man. Collin went to prison for assault and battery, though that is never stated, at least not in those terms; instead, the audience gets treated to a funny narrative of an overly-impressed witness of Collin and Miles going “Incredible Hulk(ed)” over a guy holding a fiery drink at the entrance of the bar Collin worked at.


Collin is now a changed man. He jogs in the morning before going to work, he drinks green juice trying to impress his ex, Val, with whom he shares a very sweet chemistry, and he is trying to walk the straight and narrow path. Val is the voice of reason in Collin’s life, while Miles is the devil on his other shoulder, shouting tempting nonsense. Miles, Collin’s life-long friend, is making Collin’s three final days on probation very difficult. He antagonizes Val—he resents that Val never visited Collin in jail (though she called repeatedly)—while he went to visit twice a week, forty-five minutes both ways. Miles has also acquired a gun that ends up creating problems that none of them foresaw. 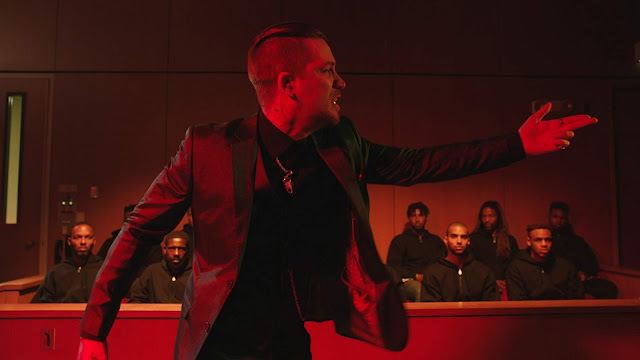 Blindspotting is a creative, edgy, authentic and entertaining kaleidoscope of modern living at play, seen right from the start of the film in which split screens show images of a gentrified Oakland, CA, and its inhabitants, shopping, dancing, celebrating, while all through the film images of city neighborhoods run by through car windows. Graffitis, odd specimens in action, and poster images of race protests through the eras also share the screen, and how not to when Blindspotting is a loud, chill inducing, in-your-face message about what it means to be Black in America. It is a wow kind of movie—it holds very well on second viewing—that despite tackling such serious, timely topics, it does so with humor, candor, and a good dose of hip-hop. 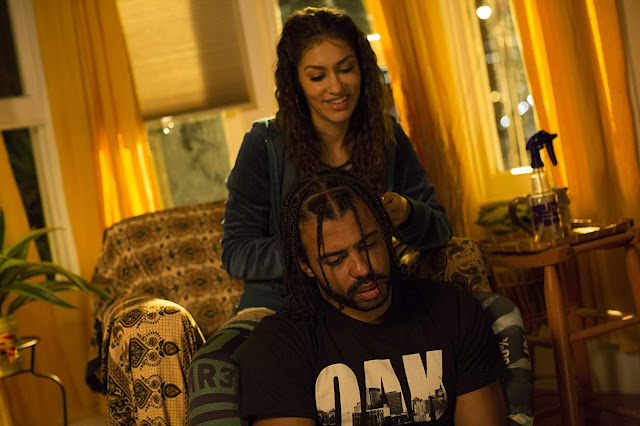 Blindspotting is wonderfully acted by the four leads. There is great chemistry in pairs as well as by the whole ensemble cast. Collin and Miles have great chemistry together, so do Miles and Ashley, Val and Collin, and all together. The banter is refreshing, entertaining and funny. But the music is what actually brings the message home.


Blindspotting is by far the most courageous and wow movie I have seen in 2018, and it gets its message across in the most natural, organic way. Not to be missed.
2018 movies movies reviews