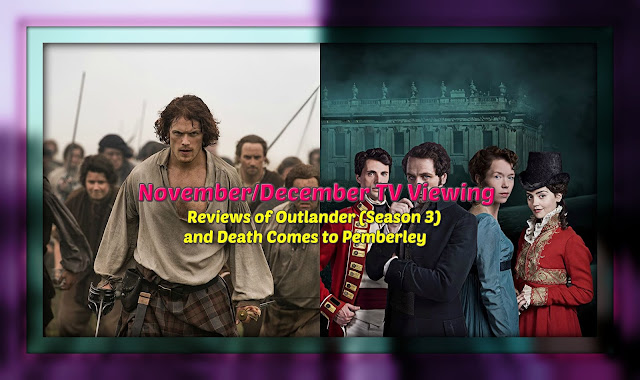 Outlander (Season 3), (♦♦♦♦): At the end of Season 2, right before the Battle of Culloden, knowing of the upsetting outcome for the Jacobite Army, Claire Fraser went through the stones back to 20th century Inverness, Scotland. Three years had passed since her disappearance. 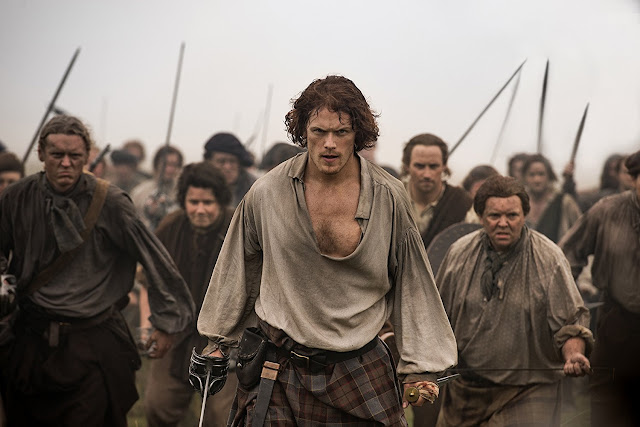 At the start of Season 3, Jamie Fraser and Claire are living sort of parallel lives, 200 years apart. Jamie has survived the Battle of Culloden though is gravely wounded. In the aftermath, the battlefield is littered with bodies and the redcoats are finishing the wounded using bayonets. Rupert Mackenzie helps transport the survivors to a neighboring barn, but the redcoats find them, condemning each and every one of them to death. All but Jamie are shot, for the redcoat in charge is the brother of a man Jamie once spared the life of, thus incurring in a debt of honor that saves, unwillingly on both sides, Jamie’s life.


After seven years back in Lallybrock’s land, Jamie is an elusive rebel (much searched for) nicknamed “the Dunbonnet”. He has learned to live a simple life taking what he needs from nature while dwelling in a cave in the adjacent forest. The arrival of a recalcitrant new redcoat officer to the local regiment causes that Jamie find his way back to jail, where he stays for three years before he is engaged in servitude—in lieu of a prison sentence until he is awarded a royal pardon—at Helwater, a sprawling estate owned by an aristocratic family known to a former enemy now turned friend. Jamie bides his time at Helwater, but once again fate has other plans. 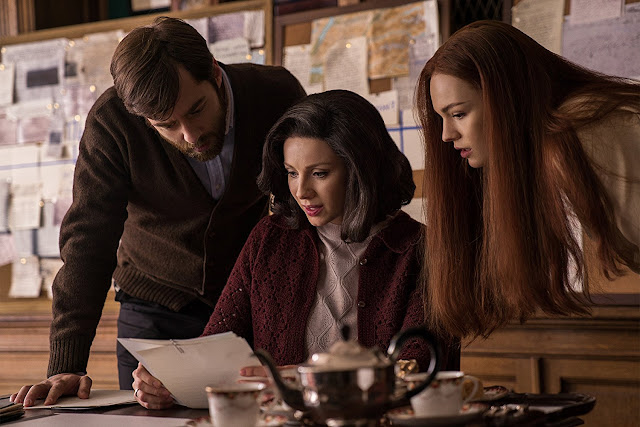 Twenty years after Culloden, Jamie is the proud owner of an established printing shop, publishing under his middle names Alexander Malcolm. On the side, he has a business importing liquor and selling it to taverns’ owners for profit. Importing liquor is illegal and an exciseman is extracting money from Jamie in exchange for his silence. Not content with that, Jamie is printing (and distributing) seditionist propaganda. He could be hanged for treason. 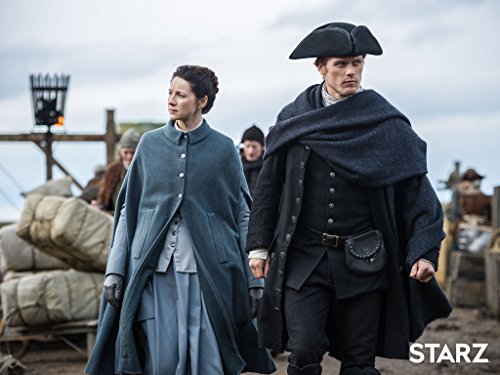 This is the life that Claire walks back into after a twenty years absence. All the while she had been living in Boston, U.S., as Frank Randall’s wife. Claire and Frank raised a daughter—Jamie’s daughter—whom they named Brianna. Claire went to medical school and became a surgeon while Frank taught history at Harvard. Their marriage had been an uneasy partnership: Claire never forgot Jamie and Frank couldn’t live with the ghost of another man standing between them. By the time that Claire returned to 18th century Edinburgh, Brianna was a young woman on her way to become a historian. 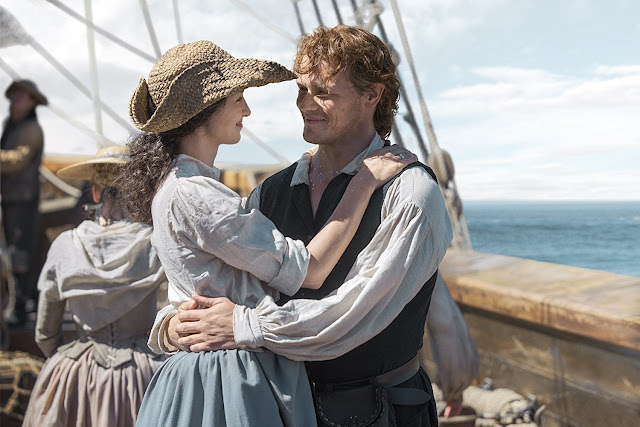 Filmed first in Scotland and then in South Africa, Season 3 of Outlander benefits from paradisiac locales both on land and at sea. While this season lacks a glaringly obvious villain, it does not lack action or intrigue thanks in great measure to an excellent new cast of characters supported by some of the most intriguing old ones. Each episode features a villain of sorts, a character displaying interesting shades of moral gray that make them distinctive and help move along this dramatically charged season from the shores of Scotland, to France, Saint Domingue, Jamaica, and finally to America, where the rest of the series will unfold. Claire and Jamie’s arrival in America has been unpropitious but it couldn’t have happened at a more pivotal point in the history of the New World Colony as the time of Revolution is approaching. 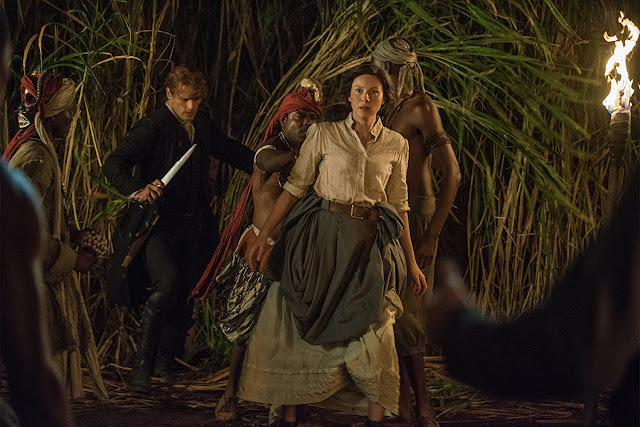 Jamie and Claire’s accidental adventures in Scotland trigger a transatlantic voyage by sea that is far from ordinary: plague and mutiny threaten every step of the way. Also, the happenings in the Caribbean—kidnappings, chance encounters with former frenemies and religious invocations with ulterior motives, give this season a relentless pace with epic feel. As in Season 2, the Skye Boat song was rearranged with percussion instruments—while a religious ceremony plays on screen—hinting at the African heritage of the Caribbean’s slaves. 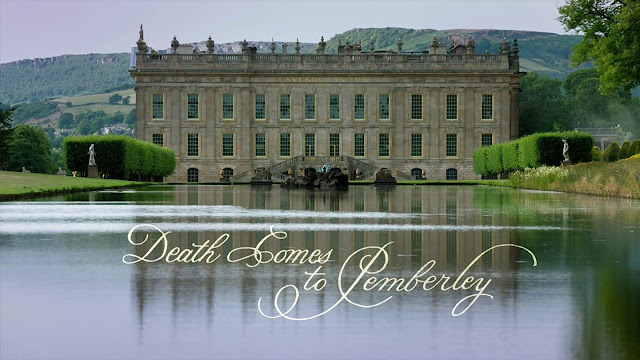 Death Comes to Pemberley (2014), (miniseries), (♦♦♦♦): Six years into the marriage of Elizabeth Bennet and Mr. Fitzwilliam Darcy all is bliss. The Darcys are going to have their annual ball at Pemberley. All society is invited, all but young Lydia (Bennet) Wickham and George Wickham, the disgrace of the family. Life for the Wickhams has not been all bad. Wickham is a well-regarded member of the army, having taken part in the Irish and the French campaigns where he served honorably. Being regarded as welcomed members of the family is another matter altogether. First, is the (almost) attachment between Elizabeth and Wickham—right before Lydia got in the way. Second, there is the prickly issue of Wickham’s courtship of Georgiana Darcy. Like I said, not welcomed. 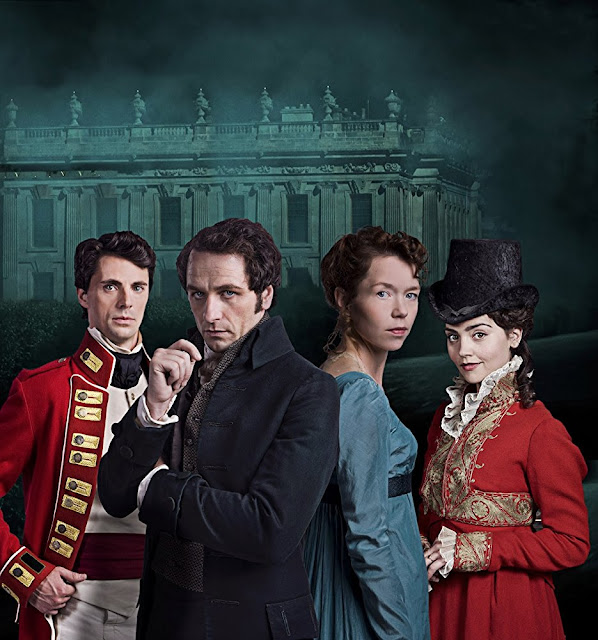 Preparations for the ball are underway in the lower floors of Pemberley Manor. The first two guests arrive earlier than anticipated. They are Colonel Fitzwilliam, a cousin of Darcy and Georgiana, and Mr. Henry Alveston, a barrister. Both men have hopes of asking for Georgiana’s hand in marriage. Mr. Darcy favors the Colonel because of his social standing; Georgiana has been secretly exchanging letters with Mr. Alveston and hopes that her brother views Mr. Alveston in a favorable light. This issue will take a backseat of sorts as the young Mr. and Mrs. Wickham spoil the upcoming party.


George Wickham’s best friend, Captain Martin Deny, is traveling in the same coach as the Wickhams to Pemberley, uninvited of course. George and Deny had had an earlier disagreement, and, in the middle of the forest, Deny asks the coachman to stop the carriage to dismount. George and Deny argue before Deny disappears into the woods, followed by his friend. Two shots are later heard in the woods, approximately in the direction both men had headed earlier, and the horses bolt in a mad, scared race. The coach arrives at Pemberley with a hysterical Lydia screaming “murder!” She is coaxed to give clear details of what has happened and a search party is sent into the woods. Deny is found dead. Wickham is, by his side, in a crazy daze admitting responsibility for his friend’s death, but...Is it true? Did Wickham kill Deny? And if he did, what were his motive(s)? The Magistrate in charge of the investigation is one who shares a muddy history with the Darcy family. Will the Magistrate, Mr. Selwyn Hardcastle, prove to be a better man than his father was and remain focused on the facts? Or, will he try to ruin the reputation of the Darcy family? 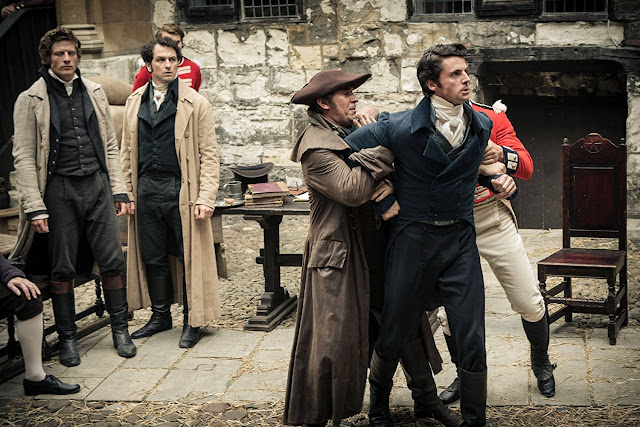 
Death Comes to Pemberley is one tightly plotted mystery from a master of suspense, with the original skeleton of classic characters that the audience adores, like the Bennet and the Darcy family members, or loves to hate, like George and Lydia Wickham, thus right from the start one feels invested in what happened and why. All characters are given additional depth, given that the story takes place six years after Pride and Prejudice, new characters with additional storylines are introduced, and the result is one absorbing tale of death, intrigue, deception, and misplaced love.


The Darcys are not the alluring couple we as an audience have come to expect; some criticism has been attached online to the casting choice, and I can’t help to partially agree. Elizabeth (Bennet) Darcy is not as pretty as other Lizzies we have come to know. Matthew Rhys, on the other hand, does make a fine Mr. Darcy because he looks dark and brooding, and that is precisely what is required of his character in this production. Mr. Darcy is displeased, having lingering doubts—"heart versus head” in his choice of wife, closing ranks around his loved ones, afraid that his family may be socially ruined, and afraid that his sister loses the opportunity of a good marriage prospect if Wickham is found guilty of murder and hangs. Both leading actors, however, look much older than their mid-30s, which is about the age the original characters must be after six years have gone by. 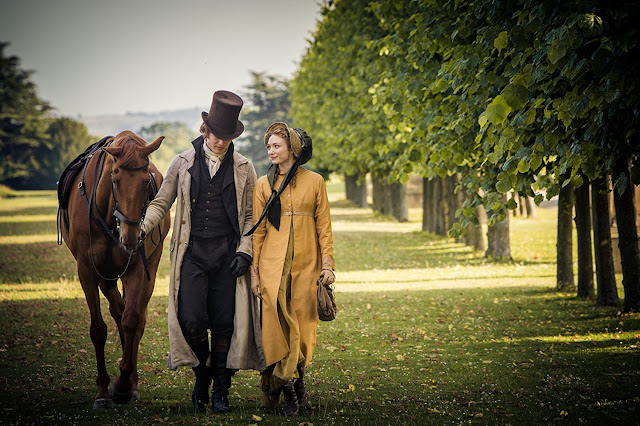 One of the striking aspects of this miniseries is the use of lighting—moon enveloped in clouds, dark nights, sepia dawns, sweeping sunsets, indirect sunlight coming indoors from the ample windows, candlelight illuminating the initial search party in the woods, dinners by soft yellow candlelight, indirect candlelight illuminating the perusal of the body. Another endearing element of this production is the sound mixture—soft vocalizations at dawn, thunder in the distance, bird calls, bees droning, the sound of a river stream, light beautiful orchestration, maddening crescendos in the scenes leading up to the discovery of Deny’s body, and haunting, atmospheric music to cue mystery.


Another beautiful element of Death Comes to Pemberley is the ample use filmmakers made of the lavish setting—what would be Mr. and Mrs. Darcy’s Pemberley estate. It is a sprawling property with a pond facing the manor, and there are frequent closeup camera shots of summer wildflowers, the adjacent woods, verdant gardens, manicured lawns adorned with statuary, and a mansion fit for nobility, which they are.


All in all, a complex, deeply textured mystery with beautiful music, photography, set designs, great cinematography and nuanced acting by the whole ensemble cast. Death Comes to Pemberley is a winner!
reviews TV shows