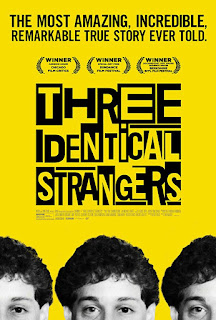 I thought I was done with chill-inducing productions coming from the 2018 cinematic calendar after I watched my recently reviewed Blindspotting. But I still had more in store. In the last few years I have come to “discover” the documentaries genre, which I never felt attracted to before. I have watched excellent environmental eye-openers such as Blackfish, Chimpanzee, Project Nim, The Cove, The Elephant in the Living Room, and the more personally-focused documentaries Jane (2017) (See Snapshots - #38), and Bombshell: The Hedy Lamarr Story (2017) (See Snapshots -#46). Three Identical Strangers fits in neither category. I would say that it is in a league of its own.


With a running time of 96 minutes, directed by Tim Wardle, Three Identical Strangers is the chill-inducing, astounding, candid, at times funny but ultimately heartbreaking journey of an undetermined set of siblings, all products of multiple births, that were separated in the first six months of their lives and adopted by separate families—all with different set of living conditions and social standing, living within a hundred-miles radius of each other without knowing it— as subjects of a scientific experiment (unbeknownst to them) with the purpose of settling once and for all the issue of nature versus nurture influence in people’s lives. The reality, however, was more sinister. The siblings were filmed for years and subjected to psychological testing by research assistants to Dr. Peter Neubauer, one of America’s leading psychiatrists and Holocaust survivor, with apparent substantial funding from private sources and government help.


Each of those siblings grew next to an older sister, also adopted from the same agency, thus the choosing of the families appears to have been deliberate. There was another more unsettling fact: all the children involved in the study—the ones resulting from multiple births—experienced mental illness at some points in their lives, even showing symptoms of separation anxiety as kids, as did at least one of their biological parents, which begs the question of whether hereditary mental health and the environment children developed in was also an objective of the study. 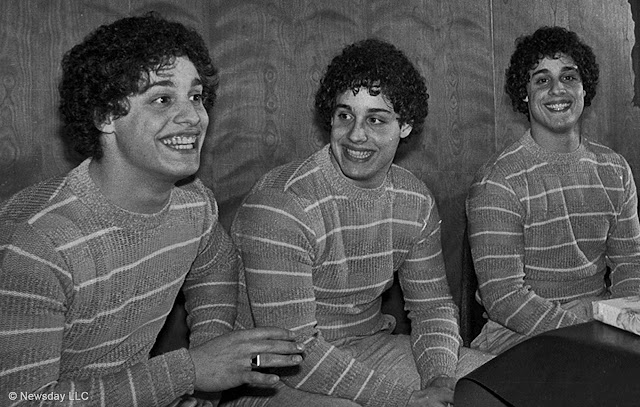 The results, if they were reached at, were never published. Sixty-six boxes containing records were left sealed at Yale University’s archives by Dr. Peter Neubauer, who died in 2008. The records are to be disclosed sometime after the year 2066, date in which all subjects involved have died. If the results were deemed so transcendental, why were they never published? Two research assistants from back then were interviewed, one states that the study settled the question of heredity being more important than initially thought of in people’s lives. If the study’s masters had no qualms about the ethics of their experiment, why not make it public? They were playing God with people’s lives is what I think. That is one striking example of science misused.


It seems the study ran from 1961 to 1980 when the case was brought to national attention as initially two siblings of triplets found their way to each other’s lives quite by coincidence. They became instant celebrities in NY, which led to the third sibling to locate them through information he found in the newspaper. The similarities were striking at first, but the differences in their upbringing as they started interacting with each other and eventually started a business together, drove them apart, leading one of them to suicide.

Eye-opening and shocking to the point of tears, Three Identical Strangers is a documentary pieced together from video, photographic images, archival media footage and interviews with families, friends, and five people—one set of male triplets, one set of female twins—that were subjects in the ethically questionable study. It is one of the most impacting experiences coming from the 2018 cinematic year.
2018 movies documentaries movies reviews